May be Pixar-lite, but there's never anything wrong with that. Made for Pixar/Disney fans and families on a quest for a new fantasy adventure everyone can enjoy.

Rated PG for action/peril and some mild thematic elements. 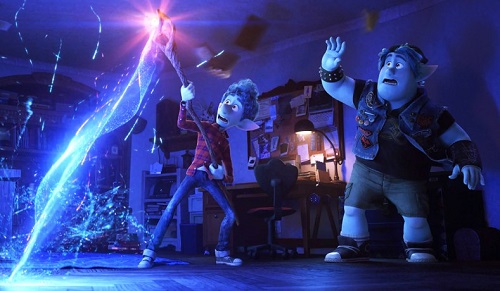 Not all Pixar glitter is gold. By now, we know that even they are not perfect. Last year may have provided us the Toy Story sequel we never knew we needed, but hopefully, Pete Docter’s Soul will have more of its title than Onward thinks it does. Don’t get me wrong, Onward has its moments of visual delight, but therein lies the problem. Co-writer/director Dan Scanlon — along with writers Jason Headley and Keith Bunin — set up some hilarious sight gags, but come up lacking in story. Merely mentioning Scanlon was also responsible for Monsters University may be all some need to know.

Ian Lightfoot (voiced by Tom Holland) never got to meet his father, Wilden (voiced by Kyle Bornheimer). His brother Barley (voiced by Chris Pratt) never got to say goodbye when Wilden fell ill and passed. But today is Ian’s 16th birthday, and their mother, Laurel (voiced by Julia Louis-Dreyfus), presents her boys with a gift for both of them. Turns out, their dad was a wizard, and left behind a magical staff, along with a spell, that will bring him back for 24 hours. But things go awry and all they manage to conjure up is their father’s bottom half. Now, they set off on the adventure of a lifetime to bring their dad completely back. But it wouldn’t be a true adventure without plenty of misadventures along the way.

Every time a Pixar film finds itself making a “DreamWorks movie” — my wife’s words — finds me cringing over a John Lasseter quote reflecting that every Pixar film has been the worst film they’ve ever made at some point. Considering the likes of Cars 2 and 3, Brave, Monsters University, and The Good Dinosaur, it makes you wonder how Pixar doesn’t have a direct-to-video department. While none of those are even close to being horrible movies, they’re just so lackluster compared to the good old days. Like I said, nobody’s perfect. But when you consider Toy Story 2 was saved from DTV and Ratatouille had to be completely overhauled by Brad Bird, they’ve managed to rise to the top from worse.

Most of the voice cast seem to be having a lot of fun — particularly Octavia Spencer as a helpful Manticore — but you can’t help but expect more from the pairing of Spider-Man and Starlord. Pratt aims for over the top at every turn, with Holland playing extra meek to try to muffle the noise. None of this helps when the finale takes a drastic turn. It never feels as sappy as it thinks it is. Never packs the wallop it wants. And never earns the man tears early word-of-mouth so desperately tried to forewarn. I would never give away the last second twist, but once you realize where the plot is really going, some viewers may start to emotionally disconnect.

Onward is just another drop in the bucket for Pixar as they continue their animation juggernaut, and with Soul coming up in a mere three months, this should be hitting video at the same time. There’s plenty to like here for diehard Pixar fans — just know that the film is more chuckle inducing than laugh out loud hilarious — and D&D players. Families will undoubtedly flock, but this may be another instance where the film takes time to find an audience, whether on video at home, or even through its eventual addition to Disney+. While Onward may never be horrible, it’s also never close to instant-Pixar-classic either.