While thematically simplistic by Pixar standards, it manages to overcome years of production issues and still winds up as another hilarious and touching Pixar outing. Made for dinosaur fans and Pixar fans. 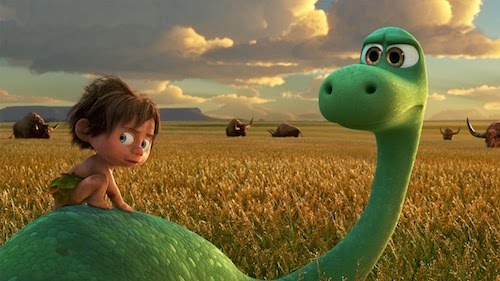 While DreamWorks still has their fair share of misses, Pixar really only has one true flub in their arsenal: Cars 2. While Brave and Monsters University have their naysayers, even they were at least enjoyable — not to mention box office hits. The only thing holding back The Good Dinosaur, is it’s coming hot on the heels of Inside Out, one of their all-time best. Director Peter Sohn’s dinosaur-western (yes, you read that right), doesn’t quite pale by comparison, but some will deem it merely adequate Pixar. In this day and age though, even mediocre Pixar still makes the best animated films of any year, which unto itself is always an accomplishment.

Sixty-five million years ago, the asteroid that killed off the dinosaurs has simply skimped by as a shooting star in the night. Millions of years later, Poppa (voiced by Jeffrey Wright) and Momma (voiced by Frances McDormand) are plowing fields and building huts to keep their newly hatched apatosaurus family safe and fed. Hatchlings Libby (voiced by Maleah Nipay-Padilla), Buck (voiced by Ryan Teeple), and our hero Arlo (voiced by Jack McGraw) are brought into a world where the dinosaurs have evolved to rule the world. Years later, the grown up siblings (now voiced by Maleah Padilla, Marcus Scribner, and Raymond Ochoa) are trying to make their mark on the family food supply, with Arlo trying to prove he’s more than just the runt.

Despite being terrified of everything, Poppa tasks Arlo with catching and killing the critter that’s been stealing their corn. Arlo gets scared causing the human child — later named Spot (voiced by Jack Bright) — to be chased into the wilderness by Arlo and Poppa. Soon enough, a storm hits, causing Arlo to witness his father’s death, and is cast into the world on his own. Not without running across little Spot of course, who leads Arlo on an adventure of self discovery involving run ins with various dinosaurs from the friendly tyrannosaurus rexes to the loopy styracosaurus to the terrors of velociraptors and pterodactyls.

When it comes to Pixar, the final product always manages to shine through the production troubles, and The Good Dinosaur is no exception. Work on the film began in 2009, when Sohn and original director Bob Peterson (co-director of Up and the voice of Dug), came up with the idea and eventually Peterson was replaced by Sohn. Meg LeFauve may get final screenwriting credit (she also co-wrote Inside Out), but the five story credits shed light on the production issues. It also underwent a major release date shift from November 2013 to May 2014, and is now finally being released. The third act was completely redone, and a lot of the voice cast was replaced. Thankfully — while still not being one of the Pixar prime films — The Good Dinosaur has come out on top.

The voice cast who remain are having a lot of fun and Sohn has managed to make more than just a good movie. Full of heart and adventure, there’s plenty to keep everyone in the family invested. While it’s hard for me to not be biased — this is a western, featuring dinosaurs, made by Pixar, three of my favorite things — it’s definitely far from perfect. Spot remains hilarious throughout, but Arlo can be a bit annoying from time to time. It also starts to get repetitive how many times he screams and runs away from something, or gets hit in the head and the film cuts to a blackout. However, the story is a lot of fun — it’s nice to see nature getting to play the villain, even if the pterodactyls and velociraptors wreak havoc — and it flies by pretty quick. And in true Pixar fashion, some viewers will want to bring along some tissues. Hilarious, heartbreaking, and gorgeously animated, The Good Dinosaur may not be perfect Pixar, but it’s still really good Pixar.

*Also, be sure to arrive on time to make sure you don’t miss the short, Sanjay’s Super Team. It’s an action packed hilarious ode to Hindu traditions and superhero tropes.