Hilarious, endlessly inventive, and beautifully animated, Pixar is back in full force. Made for both parents and kids alike, and those of us who have been waiting for the next great Pixar offering.

Rated PG for mild thematic elements and some action. 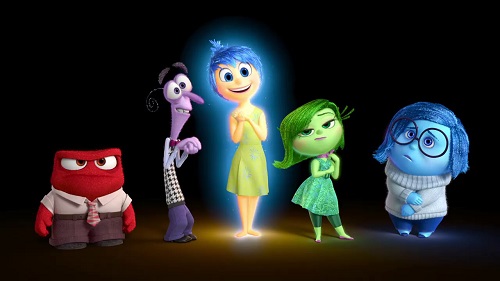 No studio is more ready for a comeback than Pixar. After taking a critical beating over Cars 2, Brave, and even Monsters University, I think even John Lasseter knew it was time to take a break and go back to the drawing board. They’ve always been the kings of family films, but it took relying on a proven director to bring them back to their glory days.

If there’s one man who can make a grown man cry, it’s Pete Docter — see Monsters Inc. and Up — and he’s at it again with Inside Out, taking us where no director has gone before. Excluding the short-lived Fox sitcom Herman’s Head of course. But where that aimed for the lowbrow, Pixar and Disney are hitting for the feels with everything they’ve got.

Young Riley (voiced as a teen by Kaitlyn Dias) has just been uprooted from the life she loves and transplanted to San Francisco with her parents (voiced by Diane Lane and Kyle MacLachlan), and her emotions are having none of it. Inside Riley’s head we meet Joy (Amy Poehler), Sadness (Phyllis Smith), Fear (Bill Hader), Anger (Lewis Black), and Disgust (Mindy Kaling), who run the control room that helps maintain Riley’s emotions and memories.

After Sadness winds up losing a core emotion, she and Joy go  on an adventure through Riley’s subconscious, taking them on a trip aboard the “Train of Thought” and meeting up with a long forgotten imaginary friend named Bing Bong (Richard Kind). Now, Sadness and Joy have to stop Riley’s core memories from falling into the abyss and wreaking havoc on her five “islands” — Family, Friendship, Hockey, Honesty, and Goofball — that make up her personality.

If there ever was a long shot in the Pixar canon, it would be Docter’s brilliant idea for Inside Out. Who knew that a family film could be so attuned to taking a psychology class. Smart is the operative word, with fun running the show. Docter and co-director Ronaldo Del Carmen have managed to deliver an adventure that may dwarf the epic story of Carl Fredricksen in Up. And the clever never lets up. Not even as the screenplay bounces from one emotion to the next.

It helps that the film is expertly voiced. Who else can you think of that emits as much joy as Poehler, the sarcasm of Kaling, or as much sadness as Smith? The funniest bits may get passed off to Black, but no character is left behind, each getting their shining moment. Did I mention you will cry? Well, most of you will. Anyone with a beating heart will never look at their emotions the same way again. I dare you to not think about your own thought process and feelings without seeing these characters in your head.

Needless to say, the film is a complete pleasure from start to finish and never takes a wrong step. Full of the state-of-the-art imagery we’ve come to expect from a Pixar production, along with all the hearts and laughs, Inside Out is truly the animated film to beat this year and there’s no way it’s going to happen. Docter has knocked it out of the park and it’s fantastic to see Pixar doing what they do best: keeping the youngsters entertained while making parents think and feel. Something they’ve frankly been missing for the last five years since Toy Story 3. Welcome back to the big leagues Pixar, it’s been too long!

*Be sure to at least be on time for any showing of Inside Out for the enchantingly fantastic musical short Lava from director James Ford Murphy about a volcano looking for love.