Featuring lots of respect to the culture on display, 'Coco' is about far more than just Dia de los Muertos. As expected, bring a box of tissues. Made for pixar fans who have been waiting for them to make a comeback. 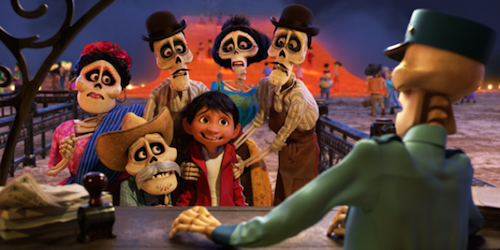 It was only a matter of time until Pixar finally got back to business. After trudging their way through Cars 2, Brave, Monsters University, The Good Dinosaur, and Cars 3, it’s nice to see them make their way back to glory with Coco. While some may find the marketing a little misleading — the title takes on a whole new meaning by the end credits — Coco is set around Dia de los Muertos, but that’s not what the film is actually about.

Coco is really a fantastic story about the power of remembering those who have departed ways with their earthly bodies. Director Lee Unkrich (Toy Story 3) and co-director Adrian Molina bring the feels — and plenty of laughs — to a celebration of all things family showing that our friends to the south have way bigger hearts than most of those residing here in the States.

Miguel Rivera (voiced by Anthony Gonzalez) is a 12-year-old living in fictional Santa Cecilia, Mexico with his shoe making family. Miguel is convinced his family is cursed and explains how his idol, Ernesto de la Cruz (voiced by Benjamin Bratt) was crushed by a giant bell during a concert. Miguel believes Ernesto is his great-great-grandfather who abandoned his mother to chase his dreams, leaving all music banned in his family through four generations.

With music as Miguel’s passion, he wants nothing more to perform at the annual Dia de los Muertos talent show. Something he can’t do after his grandmother Abuelita Elena (voiced by Renee Victor) smashes his secret guitar. Miguel hatches a plan to steal Ernesto’s guitar from his mausoleum causing him to be swept away to the Land of the Dead where he is set on a quest to find a way back before he’s stuck there forever.

For an animated film, Coco has more plot than necessary — and runs just a touch too long — but that’s exactly where Pixar excels: focused on story and characters more than selling toys or filling in release date gaps. (Think The Incredibles, Up, or Ratatouille.) Coco is an astounding visual playground that will look amazing even if you’re not living nearby a Dolby Vision theater or pick it up when it hits 4K on home video.

The voice cast are all loveable and the songs hit home — not surprising when they’re co-written by Robert Lopez and Kristen Anderson-Lopez, the Oscar winning husband/wife team behind Frozen. The songs are charming, but “Remember Me” and “Un Poco Loco” are definite earworms. Unkrich may not be firing on Toy Story 3 cylinders, but Coco is still hands down one of Pixar’s best in years — at least since Inside Out. The cultural aspect is just the icing on the cake. You will need plenty of tissues for this one.