Everything we expect from a Pixar movie: hilarious, adventurous, heartwarming, and even heartbreaking. Made for families looking for some high flying adventure or those of us who happen to be adult Pixar fans. 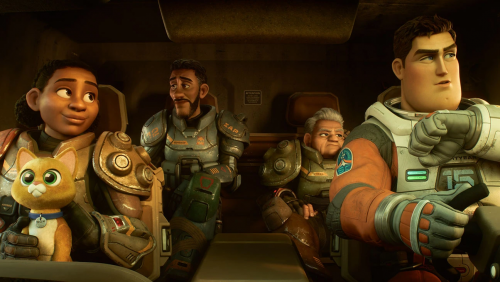 After four films, numerous shorts, and even his own direct-to-video animated feature and spin-off series, it was only a matter of time before Buzz Lightyear got his own movie. But this isn’t quite the Buzz we know and love already. Director Angus MacLane — and co-writer Jason Headley — blasts Buzz to infinity and beyond in Lightyear, a film that’s, well, light-years ahead of standard Pixar sequels and spin-offs.

Launching into hyper meta, Lightyear is the film our favorite toy Buzz is based on — one Andy definitely loved in the original Toy Story films. And just like Andy, it won’t be surprising to see a whole new generation of kids demanding a Buzz all their own — if they don’t already have one, of course.

Buzz Lightyear (voiced by Chris Evans) of Star Command, is on a mission with Alisha Hawthorne (voiced by Uzo Aduba) when they are attacked and marooned on the planet Tikana Prime. With no way home, they make the most of the situation, with everyone banding together to try to make a new home. A year later, Buzz volunteers to test a new hyperspace fuel, only to find himself leaping 4 years into the future.

Never one to back down, he keeps testing different incantations of the fuel, eventually thrust 62 years into the future. Now, Buzz must deal with the arrival of Emperor Zurg (voiced by James Brolin) and his army of robots in a rush to find the right fuel mixture to possibly go back in time to prevent them from ever landing on Tikana Prime.

Taking the meta approach and showing us the movie that Andy fell in love with Buzz to begin with was nothing less than a stroke of genius. It’s exactly the kind of movie any child would instantly want every piece of merchandise they can talk their parents into. The action is top notch, with dazzling animation, appealing characters, engaging story, and plenty of surprises.

Evans makes a fantastic Buzz and the rest of the voice cast — Keke Palmer, Peter Sohn, Taika Waititi, Dale Soules, Isaiah Whitlock Jr., Efren Ramirez, and Bill Hader — bring every character to life, while the screenplay provides each of them moments to shine. It may not be aiming for super emotional depths, but Lightyear is still absolutely everything we expect from Pixar. Hilarious, adventurous, heartwarming, and heartbreaking, no one will leave without having a spectacular time.