Buying the toys and playing with them at home would be far more entertaining. And this is coming from someone who didn't hate 'Cars 2!' Made for only the most hard-pressed families with nothing else to throw their money at. 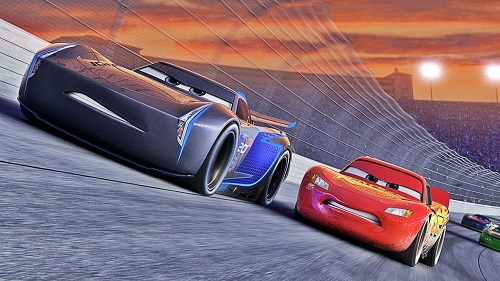 To say I hold Pixar Animation Studios to a higher standard than other studio is an understatement. I have a dog named Pixar Animation after all. So it always comes with great sadness when I find the studio phoning it in. And when it comes to the Cars franchise, it’s more palpable than ever. Studio head John Lasseter unleashed the flailing series way back in 2006 — yes, it’s now been more than 10 years since the original! — and even it sputtered right out of the gate. While it was able to make a chunk of change at the box office, it never sparked with critics. But it has gone on to a never-ending win with merchandising. This is truly Pixar’s cash cow, but with Cars 3, the teat has finally been milked bone dry.

Lightning McQueen (voiced by Owen Wilson) is still a leading champion in the world of car racing. But with his glory days starting to fall behind him, he’s starting to become overshadowed by the newer, flashier, speedier cars. Yes, the noobs have taken over the pit stops and McQueen is feeling growing pains more than ever. Jackson Storm (voiced by Armie Hammer) is paving the way for a new age of high-tech automobiles and needs to find a way to stay ahead. Soon enough, McQueen winds up in a wreck and back in Radiator Springs where he has to learn that he’s still got some life left in him yet. Then he’s off to the Rust-eze Racing Center where he’ll train with the newest cars in the game, under the tutelage of Cruz Ramirez (voiced by Cristela Alonzo).

McQueen’s catchphrase “Ka-chow” can officially be replaced with “Ka-ching!” The Cars world exists solely for Disney and Pixar to make money. And while yes, that is the point of all franchises, it’s just disheartening that no one — most of all new director Brian Fee — has put any thought into the screenplay. Endless scenes of vehicles sitting/standing talking to each other is not entertaining. At least not when it took three writers — Kiel Murray, Mike Rich, and Pixar stalwart Bob Peterson — to come up with a story barely good enough for home video. And then proceed to pad it out with a barrage of montages, training sequences, and flashbacks. There’s maybe an hour of worthy material stretched to the smallest youngster’s patience breaking point.

Considering there’s somehow been two Planes spinoffs is nothing short of a miracle. It just goes to show that when it comes to Disney, if they release it, audiences will come. Unfortunately, this may not be the last we see of Lightning McQueen and his Radiator Springs pals — or the always grating Mater (voiced by Larry the Cable Guy) who continues to be the Jar Jar Binks of Pixar. The Pixar completist in me knows this will one day wind up sitting on a shelf alongside the rest of their movies. All I can do is hope that their next — the already gorgeous-looking Coco — can prove that Cars 3 is just another blip on the radar until their next.