May not have as much to say about superhero movies this time, but Bird continues to prove he's one of the best action directors around. Made for 'Incredibles' fans, Pixar fans, and anyone looking for one of the year's funniest movies.

Rated PG for action sequences and some brief mild language. 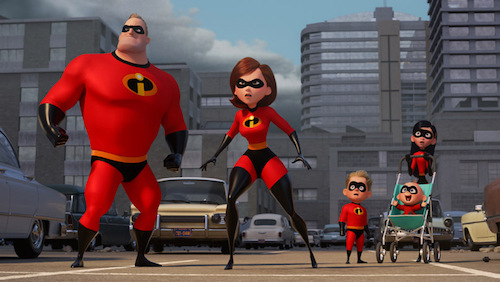 It may have taken 14 years for Brad Bird to get our beloved Incredibles back up on the big screen, but Incredibles 2 is more than worth the wait. The Parr family has returned exactly as we left them, and that’s a good thing. When it comes to sequels, you can’t shake things up too much. (Except in the case of Toy Story where Andy just had to age for its sequel.) Especially when it’s a sequel to the best superhero movie ever made. While Bird doesn’t waste time getting down to business, he knows what the true success of the first Incredibles film was: the family dynamic. In Incredibles 2 it’s back with a vengeance and puts Jack-Jack center stage, solidifying him as one of the greatest film babies of our time.

Picking up from the end of the first film, we find poor Tony Rydinger (voiced by Michael Bird) being interrogated by Rick Dicker (voiced by Jonathan Banks). Tony caught Violet (voiced by Sarah Vowell) without her mask and now Dicker has to wipe his memory. After the Underminer (voiced by John Ratzenberger) gets away, Municiberg is reminded of why superheroes are illegal: reckless collateral damage. But Winston Deavor (voiced by Bob Odenkirk) has other plans. He wants to give the people a bird’s eye view to prove that the world needs superheroes to keep them safe.

Banding together with Mr. Incredible/Bob (voiced by Craig T. Nelson), Elastigirl/Helen (voiced by Holly Hunter), and Frozone/Lucius Best (voiced by Samuel L. Jackson), they’re going to try to do just that with Elastigirl front and center. Much to Bob’s shagrin. Armed with Evelyn Deavor’s (voiced by Catherine Keener) high tech gadgetry, Helen leaves Bob home with Violet, Dash (voiced by Huck Milner), and Jack-Jack (voiced by Eli Fucile and Nicholas Bird). Bob has to learn how to juggle home duties while Helen is off catching runaway trains, saving the Ambassador (voiced by Isabella Rossellini), and putting a stop to the mysterious Screenslaver (voiced by Bill Wise).

If there’s two things working against Incredibles 2, it’s the runtime and the villain. First, it’s at least 10 minutes too long, but it’s not the Parr homestead dragging the film’s heals. There’s a subplot involving superheroes-in-hiding who come out of the woodwork to help Elastigirl after Winston coaxes them back into the spotlight. And second, the villain is way too obvious. You know who’s behind the evil doings as soon as you see them. But that’s about it.

As dazzling as Bird’s action sequences are, Bob home with the kids is the best part of the movie. For any dad who’s scared to be left home alone with their kids, they should just count their blessings that their baby doesn’t come equipped with all of Jack-Jack’s superpowers. A scene involving fisticuffs with a raccoon is a hilarious showstopper and more time could have been spent with Jack-Jack being watched by Edna Mode (voiced by Brad Bird). I’d watch an entire film based solely on those two things alone.

If anyone’s wondering if Incredibles 2 is 14 years too late, the answer is a resounding no. Just like its predecessor, it lives up to its title in every way. Bird stages some amazing action, delivers huge laughs, and keeps the heart beating strong. While it never makes the same attempts to wreck the audience the way that Coco did, it’s not that kind of movie. Incredibles 2 sets its sights on keeping the whole family entertained and never misses a beat for second. While we may be in a dearth of family films, it’s nice to see Pixar back to doing what they do best: entertaining the whole family. While some may be tired of Pixar churning out sequels, they’re more than welcome when they live up to their own standards.