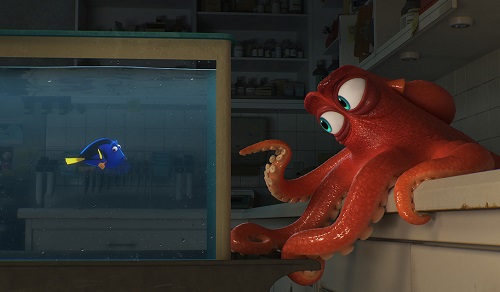 When it comes to Pixar, I have a hard time not being biased. One of my dogs’ names happens to be Pixar after all. But, I am not afraid to admit when they stumble. The Good Dinosaur would have sat better with audiences had it not come hot on the heels of Inside Out. Monsters University may not have lived up to the original — even if it still wound up being a silly, family-friendly version of Animal House. Brave has its detractors, but what’s wrong with Pixar diving into the Disney Princess Wheelhouse? And then there’s the worst of the bunch: Cars 2. While it’s nowhere near as bad as its reputation, it’s still nowhere near as good as anything else Pixar has done in their 21 year history. Considering it’s been 13 years in the making, where does Finding Dory fit in? While it may not be Toy Story 3 good, it is a splashtacular sequel to Nemo in every sense.

Dory opens with everyone’s favorite titular blue tang as a very young fish (voiced by Sloan Murray) playing with her parents Jenny and Charlie (voiced by Diane Keaton and Eugene Levy). They warn her to stay away from the undertow, but she eventually gets swept away and winds up lost. Short-term memory loss be damned, Dory becomes an adult (voiced by Ellen DeGeneres) and can’t find her way back to her parents, leading her to eventually run into Marlin (voiced by Albert Brooks). Cutting to one year after the events of the first film, Dory now lives with Marlin and Nemo (voiced by Hayden Rolence), where she helps out at school, much to the chagrin of Mr. Ray (voiced by Bob Peterson).

Soon enough, Dory starts having flashbacks and finally feels what it’s like to miss her parents. Now, Dory wants to find them, and she sets off on a set of misadventures — with Marlin and Nemo in tow — leading them all to a fish rehab center. Here, Dory must rely on the help of Hank (voiced by Ed O’Neill) — an octopus who wants to escape to Cleveland — her old whale shark pipe mate Destiny (voiced by Kaitlin Olson), a beluga whale named Bailey (voiced by Ty Burrell), a bird named Becky, and a sea lion named Gerald, to help her find her parents and get back to open water.

Expectations were sky high walking into Finding Dory. How do you live up to such lofty heights? Having original director Andrew Stanton returning was a no brainer. I wouldn’t be surprised if he ran back to Pixar HQ the minute John Carter belly flopped. Together with co-director Angus MacLane (after cutting his teeth on the shorts Burn-E and Toy Story Toons: Small Fry and the TV special Toy Story of Terror) and co-writer Victoria Strouse, the trio crafted a loving sequel that builds upon the original in all the right ways. The tears will run, whether from all the feels or from the laughs — Becky was so unexpected I could not contain myself. As exciting as it is catch up with familiar faces, there are plenty of brand new characters just waiting to fly off store shelves. If only there were plushes for Becky and Gerald — that would be amazing.

The story is every bit as poignant as you’d expect from a Pixar film, especially when it’s putting Dory front and center. Ellen brings the manically gleeful energy back and never phones it in. You can tell that she wholeheartedly loves playing this character. Brooks delivers just as much neurotic charm as we’ve come to expect and you’d never even guess Nemo was replaced. This was a no-brainer considering his original voice (Alexander Gould) is 22-years-old now. There have been a great many number of too-late sequels released over the last few years, but thankfully, Finding Dory has all the heart and laughs we’ve come to expect from Pixar.

Simply put, it’s just another fantastic notch on their belt in an incredible line of films. This is classic Pixar and there’s nothing sweeter than that whenever they have a new film out. So go ahead and jump on in, the water’s fine!