Pixar continues to raise their own bar with each 'Toy Story' and this one's no different. Even while being the funniest of the franchise. Made for everyone.

Rated G for being G. 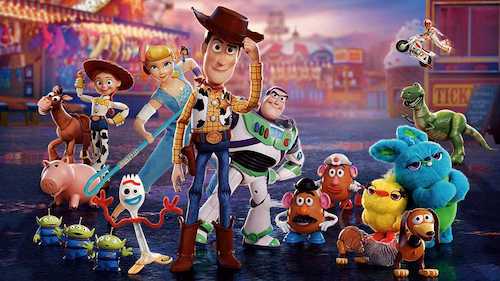 It’s crazy to think that the first Toy Story was released 24 years ago. And with Disney and Pixar being no strangers to sequelitis, it’s something of a cinematic miracle to only now be getting Toy Story 4. With each new entry, they manage to improve both story wise, and technologically. Some astounding animation awaits audiences with director Josh Cooley upping the ante yet again. Exploring the biggest cast of characters yet — while deepening and broadening their world — Disney and Pixar continue to prove that this is the one franchise they’ve keep from exhaustion.

Starting nine years in the past, Woody (voiced by Tom Hanks) is off to the rescue to save R.C. from being swept away in a storm. But not before his beloved Bo Peep (voiced by Annie Potts), along with her lamp and sheep (Billy/Goat/Gruff — voiced by Emily Davis), are carried off forever. Bo Peep tries to convince Woody to go with her, but Woody’s loyalty to Andy holds him back.

In the film’s present — about a year after Toy Story 3 — the toys are dealing with Bonnie (voiced by Madeleine McGraw) starting kindergarten. It doesn’t help that Woody keeps getting left in the closet with Bonnie declaring a new sheriff in town: Jessie. Nevertheless, Woody tags along to Bonnie’s orientation day to ensure everything goes smoothly. But just wouldn’t you know it, Bonnie constructs a new toy, Forky (voiced by Tony Hale), made out of trash, and brings him home to join the gang.

Forky doesn’t believe that he’s anything more than discarded junk and heavily questions why he’s alive. When Bonnie’s parents (voiced by Lori Alan and Jay Hernandez) whisk her — and a bunch of her favorite toys — away on a road trip, adventure comes calling. And just wouldn’t you know it, Woody quickly runs into Bo Peep at the Grand Basin Carnival Days, only to find out she’s has happily lived as a lost toy for the  last seven years.

Now, Woody has to call on Bo Peep — along with Canadian stuntman action figure Duke Caboom (voiced by Keanu Reeves) and stuffed carnival prizes Ducky and Bunny (voiced by Keegan-Michael Key and Jordan Peele) and Buzz’s (voiced by Tim Allen) “inner voice” — to save Forky from the creepy Gabby Gabby (voiced Christina Hendricks) who uses Forky as a ploy to make Woody’s voice box her own.

It’s extraordinary just how good each Toy Story is. We had no idea what we were in for back in 1995 and it’s amazing the powerhouse Pixar has become. Granted, there have been a few bumps (Brave), bruises (Cars 2), and even a flatout bomb (The Good Dinosaur) along the way. On their worst days, Pixar films are still typically better than most family flicks. With the exception being Disney’s own string of hits, of course.

Cooley — along with screenwriters Andrew Stanton and Stephany Folsom — keeps the action moving, the animation bedazzling, the jokes flying, heartstrings pulling, and life lessons learning from start to finish. The voice cast all perform admirably considering this is the fourth outing for most of them. Hanks and Allen are as chummy as ever, but it’s the new characters who steal the show. Forky is a slapstick extraordinaire, Gabby Gabby lends a surprisingly missing horror element with the help of her ventriloquist doll henchmen, and Caboom is the most hilarious character Reeves has ever played.

Ladies and gentlemen, step right up, Toy Story 4 is another amazing addition to the franchise and exceeds expectations across the board.