A pitch perfect satire of convoluted murder mysteries. Made for anyone who was sick of the dreary likes of 'The Girl on the Train' before the subgenre could even try to start.

Rated R for sexual content and language throughout, some graphic nude images, drug use and violence. 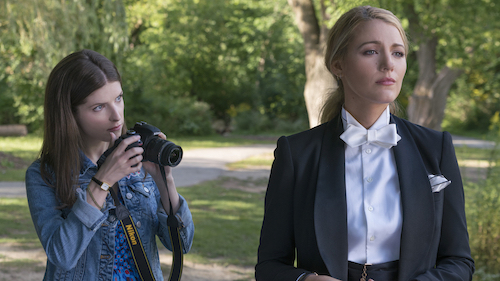 Try as they might, I wasn’t buying Lionsgate’s marketing for A Simple Favor. Advertised as “from the dark side of Paul Feig,” something just didn’t add up. From the way it’s filmed — combined with being from the director of Bridesmaids, The Heat, Spy, and Ghostbusters — I wasn’t buying it as a straight thriller. And it absolutely is not.

Feig — and screenwriter Jessica Sharzer — give Darcey Bell’s novel the Spy treatment and all for the better. While masquerading as a thriller, it’s a comedy through-and-through. After the box office/Academy Award-nominated success of Gone Girl, The Girl on the Train killed the subgenre a swift death. But Feig has dug it up and hilariously turned it on its bloated, cold-hearted head.

Stephanie (Anna Kendrick) is a widowed mommy vlogger who has just become BFFs with the most mysterious mom at her son Miles’s (Joshua Satine) school: Emily (Blake Lively). Stephanie quickly learns there may be more to Emily than it seems. Stephanie always gets stuck watching Emily’s son Nicky (Ian Ho) and working late in spite of Emily’s steamy marriage to Sean (Henry Golding).

It isn’t long before Emily winds up dead, Stephanie and Sean become the prime suspects, and Nicky starts seeing his mom around the playground. Is Stephanie going crazy? Did Sean kill Emily over a $4 million life insurance policy? How do you make the perfect martini? All this and more are answered as love, loyalty, and revenge are put to the ultimate test.

When you look at Feig’s last four films, this is his most polished yet. Feig knows funny better than anyone, but he also knows when to slow down and take some time to get serious — something most comedies fail to remember. For the mystery, twists, and laughs to work, you have to be rooting for someone. Stephanie is a pitch perfect Nancy Drew.

The best way to describe the humor is to think of how Feig made Spy as a pretty straight spy movie with a slathering of jokes. And A Simple Favor is no different. I’ve heard it’s pretty different from Bell’s novel, and all for the better. The heightened sense of reality plays like the funniest big budget Lifetime version of Gone Girl you could hope for. Lively has come a long way from her Gossip Girl days and it’s clear she’s learned a thing or two from her hubby (Ryan Reynolds) when it comes to spewing hilariously filthy one-liners.

Marketing aside, do yourself a favor and make A Simple Favor your only plans  this weekend.