While still not a great movie, 'Pitch Perfect 2' finally finds the right balance between songs, laughs, and heart. Made for fans of the original, but anyone dragged along may be surprised.

Rated PG-13 for innuendo and language. 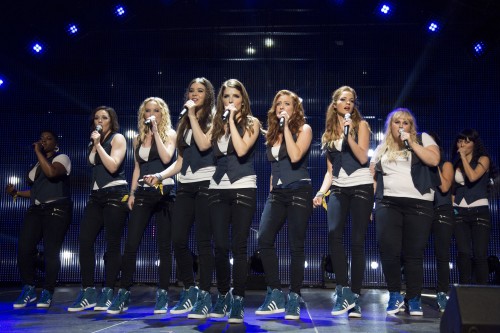 To say I walked into Pitch Perfect 2 jaded is an understatement. While still not a fan of the first film, it has, over time, become tolerable. I would never sit down to watch it, but didn’t mind having it on in the background while doing something else.

My main issue with Pitch Perfect upon its release was the tonal disconnect between the film’s trailer and the final product onscreen. Knowing what I’m getting into with the sequel — and most importantly the change in director and writer (co-star Elizabeth Banks and Kay Cannon) — I can say that I thoroughly enjoyed PP2.

Catching up with the Barden Bellas, they are thrust into the spotlight after a disastrous performance nicknamed “Muffgate” when Fat Amy (Rebel Wilson) gives the President an unintentional gift from Down Under with a wardrobe malfunction. Disgraced, commentators John (John Michael Higgins) and Gail (Banks) inform the group that they are suspended, but leader Chloe (Brittany Snow) realizes that they can’t be stopped from competing in the World A Cappella Championship in Copenhagen, which a group from the U.S. has never won because everyone hates America.

What they do have to face is Beca’s (Anna Kendrick) internship at a record studio and the unstoppable German team: Das Sound Machine. Problem is, the Bellas need to get their voice back as a group, with Beca having to find her own voice to land a real job for her tyrannical boss (Keegan-Michael Key). Lucky for Beca and the Bellas, they don’t know that their best bet just may lie in their newest addition: Emily Junk (Hailee Steinfeld).

If Pitch Perfect 2 has one issue, it’s the 115-minute runtime. The film might never be boring, but it has a lot of filler. Crammed with montages, I know the film needs to show a passage of time, but it gets a little ridiculous. However, Cannon’s screenplay features way more actual jokes than she put into the first film. Banks’ direction also helps; with how long she’s been in the comedy business, it should come as no surprise that she knows how to direct one. The jokes fly faster and stick better this time, with plenty of laugh-out-loud moments. And earns its sweetness this time — especially with the continuing romantic misadventures of Fat Amy and Bumper (Adad DeVine).

But let’s face it, you’re going for the girl power and songs, right? Well on that front, it delivers. The performances are bigger and the song selection is stronger. With Sir Mix-a-lot, Pat Benatar, Mika, Fall Out Boy, and Taylor Swift getting the A Ca-treatment, you’re guaranteed to get at least one song stuck in your head for a few days. They even manage to squeeze in a new rendition of Kendrick’s beloved “Cups.” My wife doesn’t agree with me that this is the better of the two movies, but considering I liked this one more than the original should come as high praise. Pitch Perfect 2 finally finds the right balance between songs, laughs, and heart.