The Girl on the Train

Never as relentless as it should be, leaving all thrills behind at the station. Made for possibly fans of the book, or anyone wanting to wallow through a thoroughly depressing two hours. 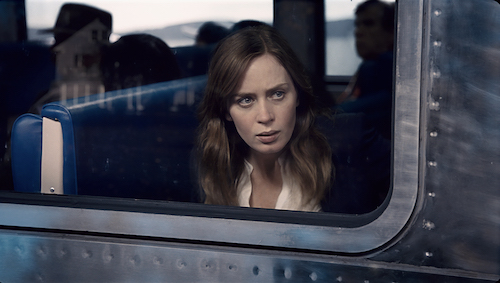 It may seem like there’s one movie every year claiming to be the new “feel bad picture of the year,” but really it’s only been David Fincher’s The Girl with the Dragon Tattoo and Gone Girl. For better and worse, the 2016 edition is The Girl on the Train. It may seem like an odd honor to seek, but, let’s face it, sometimes we wanna watch bad people doing terrible things. It’s a break from the monotony of reality and a fantastic change of pace from most of the sunshiney Hollywood offerings. Unfortunately, Girl on the Train suffers from feeling like a retread or part of a trilogy where third time is not the charm. Director Tate Taylor — best known for The Help and Get on Up — feels wholly uncomfortable working with such dour material and not even the always reliable Emily Blunt can help save the film from feeling simply like more of the same.

Rachel (Blunt) is our titular train rider. A divorcée who watches the same houses every day on her train ride into the city. In one of the houses lives Megan (Haley Bennett), a woman she slowly becomes obsessed with. We are also introduced to not just Megan and her husband Scott (Luke Evans), but Rachel’s ex-husband Tom (Justin Theroux) and new wife Anna (Rebecca Ferguson) who live two houses down. We then learn that Rachel is an alcoholic who suffers from violent blackouts and just in time for Megan to go missing. All fingers point to Scott, but Rachel confesses to him that she saw Megan kissing another man — her shrink, Dr. Kamal Abdic (Edgar Ramirez) — on their back patio. Now, Rachel is caught in a web between her old life and her current self destruction, with Detective Riley (Allison Janney) hot on everyone’s cases.

There’s really nothing inherently wrong with The Girl on the Train, so much as there’s just nothing great either. It just chugs along toward its inevitable conclusion leaving some of us trying to figure it all out, while those who have read the book become bored knowing what’s coming. Director Taylor does what he can with Erin Cressida Wilson’s sluggish adaptation of Paula Hawkins’s novel, but he doesn’t show any affinity for the bleak. Copying Fincher’s style doesn’t pay off. The term sleeper hit had been thrown around prior to the film’s premiere, but the only word I’d use is “sleeper.” The pace is never relentless enough to make you feel like you’re watching a thriller, making this feel like a star-studded big screen Lifetime flick. Ok, it’s never that bad; it’s never really good either.

There also have been some story alterations and character additions — which is always bound to happen — but the original plotting and denouement makes way more sense than what happens here. The ending isn’t as shocking as it should be, and by the time the credits role you’ll just shrug it off and begin anticipating the next film of its kind. Poor Blunt gets stuck in one of her more thankless roles, and tries her best to make Rachel as sympathetically repellant as she can. By the time the big twist rolls around, you won’t care and you’ll just want it to be over. The only good news is that it runs under two hours, so at least they didn’t try to run us through the wringer Gone Girl-style. But where that film was full of excellent performances, style, and intrigue, The Girl on the Train simply makes you wish for the train to stop so you can get off.