With Oscar season approaching, this delightfully wicked black comedy is a shoe-in for a Best Picture nomination. Made for fans of scandalous, thrilling, twisted, unpredictable and perfectly packaged films.

Rated R for a scene of bloody violence, some strong sexual content/nudity, and language. 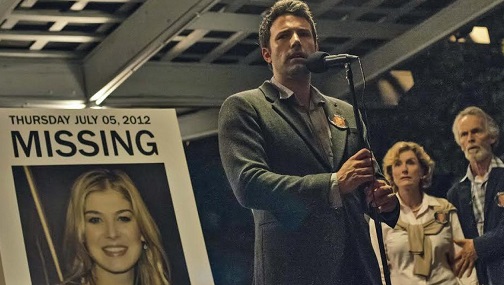 Let me clearly state this from the beginning of my review: while I absolutely love Gone Girl, know that it is not a film for everyone. It’s an adult film that is graphic in every sense of the word – in language, sexual content, violence, and so on. If you can handle all of that wrapped up in a beautiful three-dimensional package with a big shiny bow on top, then head to the closest theater immediately for one of the best films of the year.

For Nick and Amy Dunne, despite being their fifth anniversary, the morning of Thursday, July 5, 2012 started off like any other. Nick woke up at the crack of dawn, wheeled the garbage out to the curb that runs alongside their perfect suburban home, picked up a newspaper and a cup of coffee, headed to a quiet beach to read the paper in solitude, and went to the bar that he and his sister collectively own and run. Everything was going well until Nick’s neighbor called to say that his house cat was wandering in his yard. Went Nick got home, he found the door propped open and a coffee table overturned and shattered. Amy was nowhere to be found, so Nick called the police.

The first hour of Gone Girl does two things: it follows Nick (Ben Affleck, Argo and The Town) and the detectives in the several days after the disappearance of Amy (Rosamund Pike, Jack Reacher and The World’s End), and it flashes back to show us narrated entries from Amy’s intimate diary in order to see her perspective of their marriage. We see how Nick takes her disappearance, how others – including the police – perceive him, how Nick and Amy met, how they became engaged and how their marriage eroded. As it unfolds, it’s hard to not judge Nick – but around the one-hour mark, everything changes.

Without seeing it coming, the first of the many twisted revelations occurs. Just when you thought you could map out the rest of Gone Girl, it pulls a Breaking Bad by painting itself into a corner and turning for the unexpected. From the first of these moments, every time that you think you’ve got a grasp on it, the carpet is ripped right out from under you again. It’s because of that that I cannot tell you anything that occurs beyond this point. If I did, at least one crucial plot point would be spoiled. It’s because of this that no TV spot nor trailer reveals anything beyond that brilliant slow-paced first act. Considering that Gone Girl was adapted by Gillian Flynn from her hugely popular novel, we’re all lucky to not have had these things spoiled for us already.

As usual, David Fincher has turned out another brilliant piece of black comedy, something so riveting, wildly insane and well-crafted that all 149 minutes of it fly past your wide-open eyes. Leads Ben Affleck and Rosamund Pike are absolutely fantastic, each possibly delivering their best performances to date. Trent Reznor and Atticus Ross’ amazing score gives the film its dreamy and uncomfortable feel that’s established in the opening shot and doesn’t exit until the closing credits are finished.

This is what awards season is all about: the perfectly-crafted brilliant films that catch your complete attention and leave you absolutely satisfied. At this point, I can’t image enough worthy films opening in the next three months to knock Gone Girl out of contention for Best Picture.