Worth a matinee, but honestly, 'Deadpool' is a more satisfying 'X-Men' movie than this. Made for fans of Bryan Singer's 'X-Men' installments who are willing to forgive it for feeling more like his original two than 'Days of Future Past.'

Rated PG-13 for sequences of violence, action and destruction, brief strong language and some suggestive images. 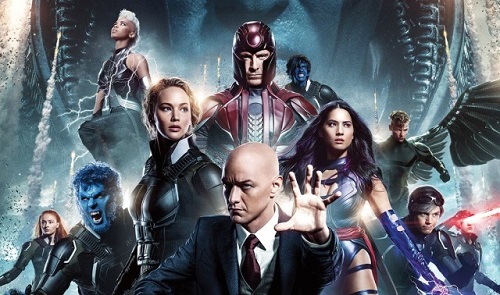 Unintentional irony abounds in Bryan Singer’s latest X-Men: Apocalypse. While he — along with screenwriter Simon Kinberg — may take a few jabs at the series, but Apocalypse also falls prey to similar gimmicks of previous X-Men films. When you make a movie that’s not any better than its predecessors, you should never attack another entry. Walking out of a theater showing Return of the Jedi, Jean Grey (Sophie Turner) makes a joke that the third entry is always the worst. While this quip is obviously pointed at Brett Ratner’s franchise killing The Last Stand, you could almost say the same for Apocalypse. That’s at least in comparison to Matthew Vaughn’s reinvigorating reboot, First Class, and Singer’s own fantastic follow-up, Days of Future Past. Apocalypse tries very hard to live up to both of them, but seems perfectly fine with not making a better movie. All we wind up with is a huge case of been there done that.

Apocalypse kicks off in 1300 BC, Cairo, Egypt. The first mutant, En Sabah Nur/Apocalypse (Oscar Isaac), is attacked as he’s about to transfer himself to a new body. Forced into slumber for thousands of years, he awakens to find the world overrun by the weaker race: humans. Meanwhile, Charles Xavier/Professor X (James McAvoy) is dealing with the split of the team after the events in Days of Future Past, running his School for Gifted Youngsters. A few new recruits are brought to the fold in teenage Scott Summers/Cyclops (Tye Sheridan) by his brother Alex/Havok (Lucas Till).

Meanwhile, Erik Lehnsherr/Magneto (Michael Fassbender) is forced out of hiding following the death of his wife and daughter when the police try to bring him in after he’s spotted saving the life of a factory worker. So dissatisfied with the world, Apocalypse recruits his four horsemen to aide him in his end of days: Psylocke (Olivia Munn), Storm (Alexandra Shipp), Angel/Archangel (Ben Hardy), and Magneto. Now, the band must get back together, along with Mystique (Jennifer Lawrence), Beast (Nicholas Hoult), Quicksilver (Evan Peters), and Moira MacTaggert (Rose Byrne) to stop Apocalypse from living up to his name.

For anyone who felt overwhelmed with the number of characters in Captain America: Civil War, there’s even more here. And considering some of them never even get the chance to use their superpowers — here’s looking at you Jubilee (Lana Condor) — you start to question why they’re even in the movie. It’s the exact same effect that The Last Stand suffered. Least surprising, the best part is the return of Quicksilver for another jaw dropping set piece. When you can barely top your own previous film, it may be time to let another director step in. And as much as I would love to see Vaughn return, I’d rather have him right where he is: directing his own Kingsman sequel.

Deja vu plays a huge part of the viewing experience here, as some of the plot points become a little repetitious. A colleague even created a drinking game during the screening where anytime you see Professor X about to cry or Apocalypse’s eyes go white you take a shot. You’d be passed out well before the credits roll. And speaking of which, why bother showing us the film almost three weeks early if we aren’t going to get to see the end credit stinger? It’s pretty obvious they wanted to get reviews out early to compete with Civil War, but I’m afraid Fox’s plan may have backfired. It’s biggest failure is in casting one of the best actors working today as your villain and then completely underutilizing him. He’s never as menacing as he should be, and we all know exactly how the finale is going to play out because the film never takes any risks. At least fans finally get a money shot they’ve waited 20 years for. Hint: Phoenix.

It may sound like I didn’t like the film — like the big Wolverine (Hugh Jackman) cameo that was already spoiled by the final trailer — but there is still a lot to love. X-Men: Apocalypse has plenty of razzle dazzle and gee whiz effects to keep the film easy on the eyes as the pace moves at a breakneck speed. You are never bored. However, it never manages to be the great film it should be, and simply winds up being a merely another good X-Men film, sitting more in line with Singer’s first two outings, rather than trying to one up First Class and Days of Future Past. A matinee won’t be the worst way to spend this trip with our favorite mutants, but it is disheartening when even Deadpool was a way better X-Men movie than this.