Long story short: best film of the year so far! Made for "Merc with a Mouth" fans and anyone who's been awaiting something non-family-friendly from Marvel Studios.

Rated R for strong violence and language throughout, sexual content and graphic nudity. 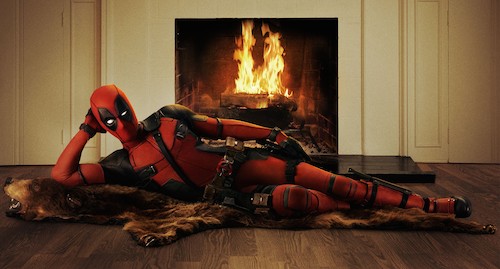 If there’s any comicbook character desperately in need of cinematic redemption, it’s Deadpool. After a dismal outing in Fox’s X-Men Origins: Wolverine, it took a matter of fan power and Ryan Reynolds to bring him back to the big screen the way he was meant to be seen. Foul-mouthed, outlandishly violent, and breaking the fourth wall with aplomb, this is the Deadpool we’ve been waiting for. It certainly helps that Fox had the balls to deliver a hard-R rating, allowing director Tim Miller to deliver the year’s best film so far and an all around amazing antihero/superhero film for the ages.

Deadpool (Reynolds) begins with the best opening credit sequence of all time. Right in the middle of a giant action sequence, we’re caught up to speed from Deadpool aka Wade Wilson himself as we learn that he’s on the hunt for the film’s “British Bad Guy” Francis aka Ajax (Ed Skrein). Francis is the only one who can help him return to normal after an experiment unleashed his mutant power of regeneration.

Wade was diagnosed with cancer and promised a cure. Turns out, that cure turned him into a scarred vigilante extraordinaire. Deadpool’s endless slaughter has caught the attention of Professor X — we never learn if it’s Stewart or McAvoy — and now Colossus (voiced by Stefan Kapicic) and Negasonic Teenage Warhead (Brianna Hildebrand) have been tasked with bringing him back to the Professor. But not before Deadpool sets out on revenge after Francis kidnaps the love of his life, Vanessa (Morena Baccarin).

Audiences are in for a treat with Deadpool. Overflowing with some of the most insane action sequences — thanks to the R rating — and hilarious zingers, this will hold up as one of the best comic book films of the year. Considering the gluttony of movies in mere months — Captain America: Civil War, Batman v Superman, X-Men: Apocalypse, Suicide Squad, Doctor Strange — we are living in a new world of entertainment of the highest order. We’re freaking spoiled. “First World Problems” am I right? Anyone who complains that there’s nothing good playing in theaters can rest easy this Valentine’s Day weekend because even your significant other will find plenty to love in Deadpool.

And I haven’t even mentioned the giant, beating heart coursing through the film. Reynolds and Baccarin have smoldering chemistry and it’s about time we really rooted for an antihero. Last year we got the return of Mad Max, but Deadpool would give the man a serious beat down. And even show Furiosa a thing or two about revenge. Deadpool is blisteringly scathing to the funny bone and truly stands on its own amongst all the comicbook films before and after as one of the best. Fox is counting on us true believers, if Deadpool makes all the chimichangas, there will be plenty more tacos to come. And that my friends, is reason enough. I can only imagine how much better future installments can be with a bigger budget. Fox put its faith behind this and so should you. Do not miss it — just make sure to leave the kids at home.

*In true Marvel fashion there are end credit stingers so make sure you stick around. I’ve only seen one of them and can’t wait to see the film again to see what they held back.