Hilarious, classy, razor sharp, and brutal. Made for anyone who’s complained that adult action fare has been watered down.

Rated R for sequences of strong violence, language and some sexual content. 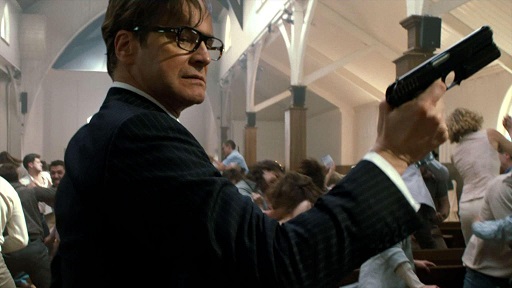 A lot can change when adapting a graphic novel for the big screen. In the case of Kingsman: The Secret Service, it helps that director Matthew Vaughn co-created the source material. Vaughn also took the time to breathe life into the subject of spies in the modern world, and even classed things up a bit. Comicbook writer Mark Millar (also responsible for Kick-Ass) may have wrung a lot of laughs in comic form, but Vaughn and his big screen co-writer Jane Goldman (Stardust, K-A, and X-Men: First Class) make the film version even funnier, and way more badass.

The Kingsman are a secret service of select operatives. The best of the best is Harry “Galahad” Hart (Colin Firth) who has just lost his new recruit after jumping atop a terrorist with a bomb in the Middle East. Harry visits the man’s wife and child, Little Eggsy (Alex Nikolov), presenting them with a medal of honor and a promise that if they ever need help to call the phone number on the back of the medal and relay a secret message. Seventeen years later, Eggsy (Taron Egerton), is a military dropout always looking for trouble, never batting an eye at stealing a car and leading police on a chase.

After winding up in jail, Eggsy calls the number on the back of his father’s medal and Harry is awaiting him as he’s released from custody, no questions asked. Soon, Harry introduces Eggsy to the undercover world of the Kingsman. Meanwhile, celebrities from around the globe have been going missing, and all signs point to the maniacal tech-guru Valentine (Samuel L. Jackson), along with his sidekick Gazelle (Sofia Boutella). Now, the Kingsman are put to the ultimate test of stopping Valentine, with Eggsy hoping to just make it through training without winding up in a literal body bag.

If that sounds like a lot of exposition, I didn’t even touch most of it. The film is two hours of plot, but never feels convoluted. In fact, it breezes by with intertwining story threads at constant full throttle. It also helps that director Vaughn has improved the original story. While plenty of fans will feel like there were too many changes, they help make a far better movie than sticking with the original comic. The core story stays the same, but consider this the bizarro world version. Plus, the whole cast is having a blast. Something that rings true in every Vaughn film.

The violence is almost on par with Quentin Tarantino’s Kill Bill, but surprisingly less bloody. The violence really takes over at a hate mongering church in Kentucky where we’re finally able to sit back and bask in the glory of Vaughn’s violence gone wild. Taking a page out of Gareth Evans’ Raid films, this scene will go down as one of the best action sequences of the year and the same can be said for the film itself. Kingsman: The Secret Service is hilarious, classy, razor sharp, and brutal.

For anyone who’s complained that adult action fare has been watered down, things are finally looking up. Put Kingsman right alongside John Wick and action fans can find themselves with films to cheer about. It’s clear that as of right now, Vaughn can do no wrong. Do not miss Kingsman: The Secret Service.