Tears down the MCU while setting up phase three in spectacular fashion. Made for marvel fans and everyone left with a sour taste in their mouth after the bitter letdown of 'Batman v Superman'

Rated PG-13 for extended sequences of violence, action and mayhem. 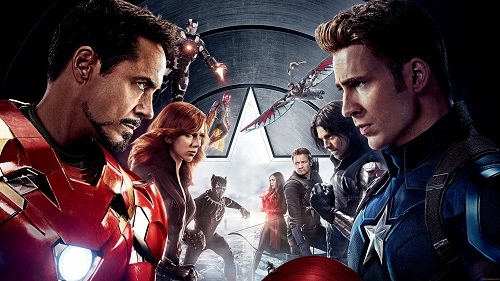 It’s hard to believe that in less than a decade we’re now on our 13th film in the Marvel Cinematic Universe. And Marvel Studios also has four television series that interconnect: Agents of SHIELD, Agent Carter, Daredevil, and Jessica Jones. If there’s one studio who knows what they’re doing, it’s Marvel. After launching with Iron Man back in 2008, we are now on phase three and with the third Captain America film, Civil War is undoubtedly the best yet.

While this may be Cap 3, it feels more like Avengers 2.5, packed with everyone from the Marvel movies—sans Hulk and Thor who will be tag teaming in the upcoming Thor: Ragnarok. Make no mistake, the Russo brothers (Joe and Anthony) are two of the best directors working within the MCU and Civil War raises the stakes for everything that’s lead up to this point and where it goes from here.

Flashing back to 1991, Civil War kicks off with our favorite Winter Soldier Bucky Barnes (Sebastian Stan) crashing a car and stealing a case of super soldier serum from the trunk. In the present, Steve Rogers/Captain America (Chris Evans) is chasing after Brock Rumlow/Crossbones (Frank Grillo) in Lagos to stop him from stealing a biological weapon. Unfortunately, Wanda Maximoff/Scarlet Witch (Elizabeth Olsen) accidentally blows up an office building when Crossbones reveals he was trying to blow up Cap. Now, the United Nations has decided to step in and make the Avengers face their collateral damage after the attacks on New York, Washington D.C., Sokovia, and now Wakanda.

All of the Avengers are asked to give up their freedom by signing the Sokovia Accords. Surprisingly, Tony Stark/Iron Man (Robert Downey Jr.) is spearheading their “resignations” while Cap is worried about what happens when they want the Avengers to go somewhere they shouldn’t, or won’t let them help where they should. A rift divides the Avengers after a Vienna conference is attacked and King T’Chaka (John Kani) is killed, with all signs pointing to Bucky with the King’s son T’Challa/Black Panther (Chadwick Boseman) vowing revenge. Meanwhile, Cap is trying to keep Bucky sheltered, convinced he was framed, with the mysterious Helmut Zemo (Daniel Brühl) poking around in Bucky’s past.

Considering how many characters and subplots are juggled around in Civil War it’s a wonder nothing gets lost. Never does the film feel convoluted and every character gets a chance to shine. The big airport battle is a wonder to behold. It’s pure spectacle on every level. The scene was also shot in 65mm and is just breathtaking. Let alone that considering we already have Cap, Iron Man, Black Widow (Scarlett Johansson), Winter Soldier, Falcon (Anthony Mackie), War Machine (Don Cheadle), Hawkeye (Jeremy Renner), Vision (Paul Bettany), Scarlet Witch, and even Sharon Carter (Emily VanCamp) all fighting for screen time, the most amazing thing is that Ant-Man (Paul Rudd), Black Panther, and Spider-Man (Tom Holland) are the real standouts. They each steal every scene they’re in.

The Russo brothers deserve a standing ovation for crafting Marvel’s biggest film to date, it certainly helps that screenwriters Christopher Markus and Stephen McFeely do Mark Millar’s storyline absolute justice. Audiences will feel the spark to pick a side — I stand on Team Cap — but both Rogers and Stark throw convincing arguments. Brühl is the only one who doesn’t quite get his chance to shine, but in the end his character winds up being a more than satisfying Macguffin.

The stage is set for what’s to come, and Civil War manages to tear down everything that’s come before it. It all may just be another stepping stone on our way to the big throwdown with Thanos, but my god what a wonderful stone this is. Civil War is everything you could want in a Marvel film, summer blockbuster, or just a good old fashioned time at the movies. It may not be comfortable to watch mom and dad fight, but what a spectacular fight it is.