Never packs the emotional wallop it should, even if the doll scenes are top-notch razzle dazzle. Made for adults looking for something more than spectacle, even if that's where this one excels. 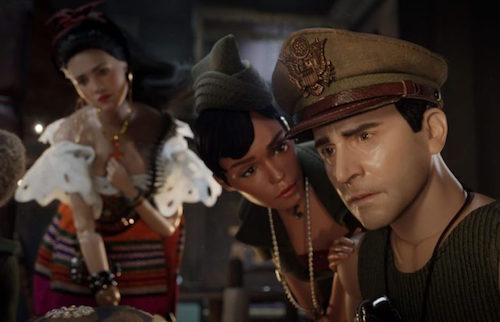 It’s been a rough comeback for Robert Zemeckis after his years in the uncanny valley of motion capture — The Polar Express, A Christmas Carol, and Beowulf. Within a mere span of six years, Zemeckis — the man behind the Back to the Future trilogy, Who Framed Roger Rabbit, Forrest Gump, and Cast Away — insulted audiences with his three worst films.

When it was announced he would be making a live-action return with the Denzel Washington-starring Flight, I hoped the magic had returned. Boy was I wrong. Thankfully, The Walk showed a return to form, but he stumbled again with Allied. So when I saw he was behind the Mark Hogancamp biopic, Welcome to Marwen, it looked like maybe his bad days were behind him. Unfortunately, that’s only half true.

When focusing on the fictional, therapeutic “Village of Marwen,” the film excels. It’s action-packed, hilarious, authentic, and heart-wrenching. The same cannot be said of the real world theatrics of Mark dealing with PTSD after being assaulted by a group of men — Louis/Captain Topf (Falk Hentschel), Carl/Lieutenant Benz (Matt O’Leary), Rudy/Rudolph (Nikolai Witschl), Stevie/Stefan (Patrick Roccas), and Vern/Werner (Alexander Lowe).

The fictional world of Marwen is a fantastic combination of practical, CGI, and motion capture performances that make Zemeckis look like a kid in a candy store. It’s so realistic it almost makes me wish for a “live-action” version of Toy Story. Almost.

The biggest problem with Welcome to Marwen, is the screenplay. Zemeckis and co-writer Caroline Thompson (Edward Scissorhands, The Addams Family, Homeward Bound: The Incredible Journey, The Secret Garden, The Nightmare Before Christmas, Corpse Bride) are above this. There’s just no emotional impact as we watch Mark deal with the upcoming sentencing of the men who robbed him of his life. It’s the standard will he/won’t he go scenario, and we all know how it’s going to end before the credits role.

It’s sad to see the year end in such a fizzle. But with everything else in theaters it’s not a total bust. Welcome to Marwen isn’t even a way for adults to escape the razzle dazzle CGI extravaganza glutton we’re experiencing with Spider-Man: Into the Spider-Verse, Aquaman, Bumblebee, Mortal Engines, even Mary Poppins Returns and Fantastic Beasts: The Crimes of Grindelwald. But at least the CGI here serves more of a story aesthetic than simply being the story.

The Zemeckis brand may still be on the rise, but Welcome to Marwen is like drinking Shasta instead of Coca Cola. It’s pretty good; but only reminds you why the other is better and suffers from a disappointing aftertaste once it’s over. A documentary was made back in 2010 and you’re better off seeking out Marwencol instead.