Another beautifully crafted, if stomach rolling, notch on Zemeckis’s belt. Made for 'Man on Wire' and Zemeckis fans alike. 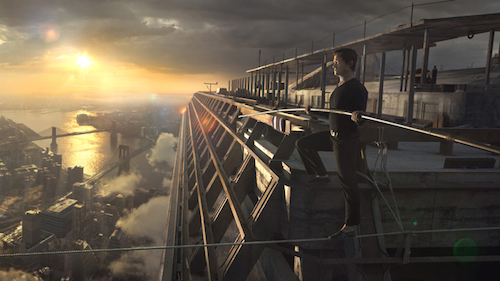 While Robert Zemeckis was busy playing in his uncanny valley of The Polar Express, Beowulf, and A Christmas Story (the animated Jim Carrey one) — all abominations btw — he made a stumbling return to live-action with the Denzel Washington starring Flight, the most shallow and transparent Best Picture nominee since A Beautiful Mind — at least Flight didn’t win. So I had my reservations when he announced that he’d be adapting a film of Philippe Petit’s autobiographical To Reach the Clouds that chronicled his dream of walking a tightrope between the two towers of the World Trade Center.

The other reason to give pause to this is the fact that a documentary about Petit’s shenanigans (Man On Wire) was released a mere seven years ago. Let alone that the release of the film’s first trailer made it seem like a complete retread. The good news is, Zemeckis has kept the same structure as Man on Wire’s director James Marsh, with The Walk having the feel of a heist movie. While it also feels somewhat like an origin story, it’s certainly fitting considering Petit’s larger than life aspirations. The fact that he not only pulls off the stunt just makes it even more audacious. And the same can be said of Zemeckis himself, this is the best film he’s made in 15 years.

The story has been condensed, but the thrill remains the same. We meet Petit (Joseph Gordon-Levitt) standing on the torch of the Statue of Liberty. Here, he introduces himself and we’re whisked away to 1973 where he’s essentially a street rat. Performing in the streets for spare change as a juggler, he meets Papa Rudy (Ben Kingsley) whom he convinces to teach him his secrets of tightrope walking. In the streets he meets fellow street performer Annie (Charlotte Le Bon) whom he convinces to join him on his quest to walk between the Twin Towers. Along with two other accomplices — Jean-Louis (Clément Sibony) and Jeff (César Domboy) — they’re off to New York City to attempt a feat the world will never see again.

All the Zemeckis trademarks are found in The Walk. Gee-whiz technological achievements. Characters you care about. An Alan Silvestri score. Yes, Zemeckis is back in full force. Word on the street is that people are throwing up all over the country in screenings and that’s something that should come as a badge of honor. The man hasn’t made a watchable film since Castaway, and now is able to turn around and make you lose your lunch is quite a statement. I may not be terrified of heights, but there are endless moments that would make the most daring filmgoer feel butterflies in their stomach. Terrifying is one word. Fantastic is another.

It’s incredibly crowd-pleasing with everyone in the cast playing their part to the hilt. Some snickered at what sounds like a ridiculous accent coming out of JGL’s mouth, but anyone who’s seen the documentary knows that’s exactly how Petit sounds. It’s too bad he wasn’t brought in to narrate the film, it could have made it just a little bit better. As it stands, The Walk is another beautifully crafted, if stomach rolling, notch on Zemeckis’s belt. It may not be his best movie, but it’s still one of the year’s best. And with it opening in IMAX 3D theaters today — a week and a half before it expands nationwide — it’s the only way to see it. The Walk is one you won’t want to miss!