Momoa finally gets thrust into the spotlight and fares far better on his own than as just another Justice League cohort. Made for DC fans, comicbook fans, and anyone looking for a grand adventure.

Rated PG-13 for sequences of sci-fi violence and action, and for some language. 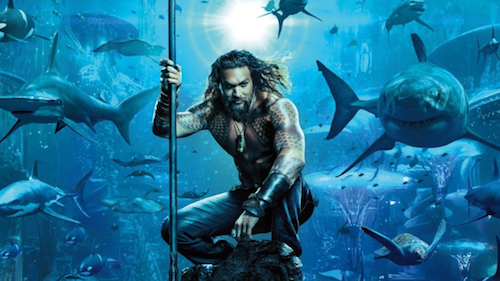 After the success of the Marvel Cinematic Universe, it was a sure bet DC Comics would try to  keep up. What DC forgot to do, was inject a sense of fun into their films. Gritty, brooding, and way too grounded for superhero films, audiences hungered for DC to get it right. With Wonder Woman, they came close. But the finale only reminded fans of everything wrong with the DC Extended Universe. Now, along comes director James Wan to go full-DC and embrace Aquaman’s outrageousness full tilt to deliver the best DC film since Man of Steel, and the best DCEU entry yet.

Arthur Curry/Aquaman (Jason Momoa) introduces us to the backstory of his parents, Thomas Curry (Temuera Morrison) and Atlanna (Nicole Kidman). Atlanna is on the run from an arranged marriage and winds up finding solace with Thomas, a simple lighthouse keeper in Maine. Atlanna eventually gives birth to Arthur, whom she wants to be the missing link to show there can be peace between the worlds above and below the ocean. Soon enough, Atlanna is found out and she is forced to return to Atlantis where she is executed for birthing a half-breed. In the present, Arthur is called up on by Mera (Amber Heard), after Arthur’s half-brother/King of Atlantis, Orm (Patrick Wilson), starts building an army to wage war on the surface. Meanwhile, David/Manta (Yahya Abdul-Mateen II) is on the hunt for Aquaman after leaving his father do die.

Aquaman may still suffer from a case of being convoluted — a plague upon the DCEU from the get go — but it more than makes up for it with a huge sense of fun, style, and badassery. Wan has taken what should have been — and admittedly still is — the most ridiculous of the DC characters, and turned it into an amazing adventure. The screenplay — courtesy David Leslie Johnson-McGoldrick and Will Beall — zooms along at a breakneck pace, as it globetrots its way to the end credits. Usually a pace like this could spell disaster, but the action is never boring, and it leaves you wanting more.

Speaking of the action, Wan directs some of the year’s best. Full of carefully choreographed fights — more than a few captured in what’s made to look like one take — and precision editing, no matter how high the stakes get, at least you always know what’s going on. Action films as of late, rely far too heavily on quick cuts to cover up either the actor’s inabilities, or the director’s inadequacies, but that’s never the case here.

While I previously had never been fully aboard the Momoa train, I do have to say he’s finally grown on me. Giving him his own feature was just what he needed to complete winning over the naysayers and you can tell he’s having the time of his life. I used to look at him as trying way too hard to be the new Dwayne Johnson, but my friend told me to consider him more as The Rock’s dorky brother and now I get the appeal.

Aquaman is everything we’ve been waiting for in the DCEU. It didn’t hurt for me to see it filled with sharks, dinosaurs, and kaiju, oh my! As for the upcoming entries, thankfully, Shazam! is going to be a full-blown comedy. But it’s gonna be interesting to see how Birds of Prey (and the Fantabulous Emancipation of one Harley Quinn), Cyborg, Wonder Woman 1984, Green Lantern Corps, The Flash, and The Batman can measure up. A bar has been set, and all expectations are now Aquaman high.