A sequel that's practically perfect in every way. Made for Disney fans, Mary Poppins fans, muscial fans, families, everyone.

Rated PG for some mild thematic elements and brief action. 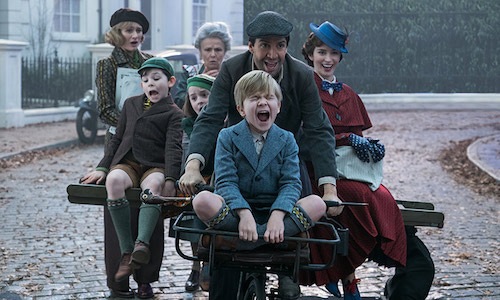 It’s been 54 years since Mary Poppins graced the silver screen to the delight of audiences and the dismay of author P.L. Travers. With the release of Saving Mr. Banks, it was obvious Disney was in the midst of a Mary Poppins revival, and here at last is Mary Poppins Returns. While having never received the sequel treatment before now, director Rob Marshall still had a huge legacy to live up to. And Returns is a smashing success from start to finish.

Filled with all new original songs, a brilliant performance from Emily Blunt, and old school Disney sensibilities, Mary Poppins Returns arrives just in time for the holiday break. And just in time to save Disney’s live-action reputation after this year’s mediocre outings of A Wrinkle in Time, Christopher Robin, and The Nutcracker and the Four Realms. Audiences could use a spoonful of sugar and Returns is just what the doctor ordered.

Twenty-five years after Mary Poppins (Blunt) saved Mr. Banks and his children’s relationships, Michael (Ben Whishaw) is repeating history. With the recent passing of his wife, he’s becoming overworked and estranged from his own children — John (Nathanael Saleh), Anabel (Pixie Davies), and Georgie (Joel Dawson). To rub salt in the wound, the bank has come to inform Michael he’s about to lose their beloved family home of 17 Cherry Tree Lane.

Jane (Emily Mortimer) will do anything she can to help him find a missing shares certificate, but in the meantime, Mary Poppins has arrived to once again look after the Banks children — along with Michael’s too. Now, Michael is in a race against time after bank owner William Weatherall Wilkins (Colin Firth) gives him a deadline to come up with the certificate or lose the house for good. Meanwhile, the children are whisked off on their own adventures with Mary and lamp lighter Jack (Lin-Manuel Miranda) to do what they can to help while trying to earn back their dad.

For interested parties, there are no repeats of the original classic songs. But fear not, there are nods to them sprinkled throughout Shaiman’s score. A heaping helping of new earworms abound for repeat ad nauseum. I have no idea how many times I’ve listened to “Trip the Light Fantastic.” When you see a film nearly three weeks early, you’re stuck with what you can get and only two songs have been released as of this writing. Once the full soundtrack drops, I cannot wait to be able to listen to Marc Shaiman and Scott Wittman’s songs and score again.

There is probably no one else who could possibly have stepped into the huge shoes Julie Andrews’ Oscar winning performance left to fill. Blunt is spectacular and even manages to put her own stamp on Mary. Considering it’s been 25 years since anyone has seen her, you might expect at least a tiny bit of personality change. But fear not, this is still the Poppins everyone knows and loves and she’s every bit straight-laced, mischievous, and cheeky as ever. The rest of the cast is superb as well with Miranda getting a chance to show off his Hamilton skills following a fantastic Blunt performance that feels right out of Marshall’s own Chicago.

Marshall hasn’t had the best streak since his Oscar nominated turn directing Chicago — Memoirs of a Geisha, Nine, Pirates of the Caribbean: On Stranger Tides, Into the Woods — none of these allowed him to live up to expectation, until now. The musical numbers are huge and expertly choreographed/staged/shot/edited. For grand musical numbers to fully work, everything has to work in tandem and every number here is a homerun. Even the requisite animated sequence is top notch. The combination of live-action/animation works beautifully and just makes me want a Roger Rabbit sequel even more — Disney, call me, I have your idea ready! There’s even an edge of danger abound, right out of Wind in the Willows.

It took a lot of work to come up with a worthy Mary Poppins sequel, and even with Travers’s book at their disposal, I don’t mind Disney waiting to make sure everything was practically perfect in every way. If you aren’t a huge Mary Poppins fan this may not be for you, but Marshall engages the audience from start to finish — some may shed a few tears along the way — and makes sure Mary Poppins’s return is everything we could want and more.