Wan continues his freak streak, even if his films are starting to feel slightly calculated. Made for fans of the first film and anyone looking for a horror movie that's actually scary. 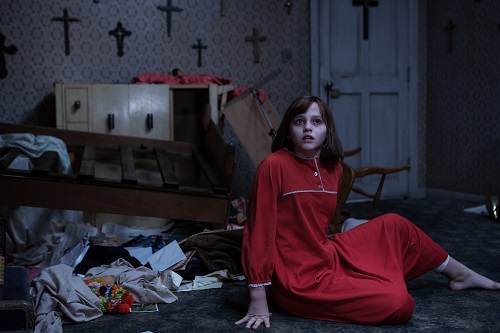 Aside from uber producer Jason Blum, you can’t find a harder working filmmaker in the horror genre than James Wan. Considering he’s almost always been working in the category, his movies never disappoint when you need chills running up your spine. While he may have taken a time out here and there — Death Sentence and Furious 7 — he’s delivered quite a stack of horror delights over the past 13 years. Through Saw, Dead Silence, the first two Insidious films, and the original The Conjuring, he’s back where he belongs with one of horror’s more effective sequels, The Conjuring 2.

Beginning in 1976 at the notorious Amityville house, Ed (Patrick Wilson) and Lorraine Warren (Vera Farmiga) encounter one of their most heinous hauntings. A year later, the poor (literally and figuratively) Hodgson family are about to encounter England’s most documented hauntings right in their own home. Eleven-year-old Janet (Madison Wolfe) has been dealing with the possible possession of their home’s previous owner, Bill Wilkins (Bob Adrian). Bill wants the family to leave, and the Warrens are brought in to investigate before the church gets involved. And just wouldn’t you know it, the funhouse of horrors begins as the Warrens’ most dangerous case could put both their lives on the line.

No one does bumps in the night as terrifyingly as Wan. No disrespect to Guillermo del Toro, but Wan has this locked down. While at times it may slip into calculated territory, make no mistake, Wan knows how to make your hair stand on end, jump out of your seat, and hold your breathe in dread better than any other horror director working today. Yes, this time the screenplay has a tendency to feel like you’re channel surfing. It feels like you’re watching scenes skip from The Exorcist to Evil Dead, The Omen to Final Destination, and Poltergeist to Nightmare on Elm Street, but pretty much every scare always works with maximum effort. The less said about the “Crooked Man” the better — pure nightmare fuel!

The cast all prove themselves admirably, with poor Wolfe getting put through the wringer. Oddly enough, the one character we don’t feel as much empathy for is her mother Peggy (Frances O’Connor). The original Conjuring made us feel for every single member of the Perron family, but here, Peggy makes some questionable choices with her childrens’ safety. There’s also Johnny (Patrick McAuley) who you forget is even in the movie until he decides to stand up for the family and confront their demon. Surprisingly, many moments of levity help alleviate a little of the tension, something some horror movies forget. But don’t worry, The Conjuring 2 is still straight-for-the-jugular horror of the first order. The final word being, Wan manages to knock it out of the park again, delivering the year’s scariest horror movie so far. You’ve been warned.