Another horrible example of a good idea gone awry. Stick to the original short. Made for anyone easily scared by loud noises or who loves nonsensical storytelling.

Rated PG-13 for terror throughout, violence including disturbing images, some thematic material and brief drug content. 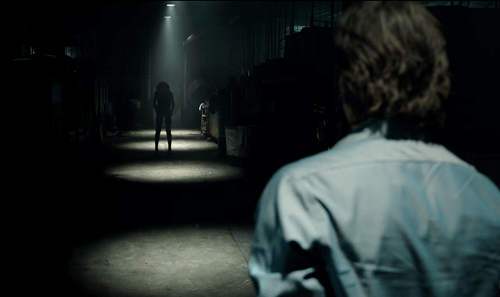 With so many really good full-length films based on horror shorts — The Babadook, The Evil Dead, Mama, Trick ’r Treat, The Grudge/Ju-On, Saw — there’s bound to be a few duds — Darkness Falls is one of the worst. But there’s a new crowning achievement for bad horror — in spite of its rating on RottenTomatoes. And what’s really sad is that the original Lights Out short is truly scary. Alas, something was lost in translation when David F. Sandberg got the greenlight from producer James Wan (Saw, The Conjuring, Insidious), and it seems to lie solely with Eric Heisserer’s screenplay. It doesn’t help that he has no idea how to direct his cast, no matter how well he thinks he’s edited together the next scare sequence.

Paul (Billy Burke) is working late, making phone calls trying to find help for his sick wife Sophie (Maria Bello). Also working late is Esther (Lotta Losten) who sees someone standing in the shadows whenever she turns the lights out. Sure enough, Paul is viciously attacked and killed, leaving poor Sophie to face her demons alone, while wreaking havoc on her son Martin’s (Gabriel Bateman) sleep. After falling asleep in class for the last time, a social worker gets involved and Martin’s estranged sister Rebecca (Teresa Palmer) offers to help. She assures Martin that their mother is off her meds, until he mentions that mom has a nightly visitor named Diana (Alicia Vela-Bailey). Rebecca has dealt with Diana before and before you can say “Scooby Scooby Doo, where are you?”, Rebecca and her boytoy Bret (Alexander DiPersia), are hot on mom’s case to put a stop to Diana’s family torment.

I’ve suffered through my share of horrible horror movies over the years, but this is by far one of the worst theatrical releases in years. Lights Out is only the second horror movie released this year — if you don’t count The Shallows — but it sure puts a sour taste in your mouth. Considering Wan delivered the goods with The Conjuring 2, he wasn’t able to pull another rabbit out of his hat here. Back in 2014 he delivered the one-two punch of the first Conjuring and Insidious: Chapter 2 all by himself within months. Yet Lights Out is just awful. Full of boring characters played by obviously bored actors, it doesn’t help that Heisserer — no stranger to horror after A Nightmare on Elm Street, Final Destination 5, and The Thing — is clearly not capable of whipping up an original screenplay. The closest thing to one before was Final Destination 5, and as much as people may complain about that entry, at least he managed to pump some fun into the series.

If you really want to know how bad Lights Out is, let’s put it this way: my wife may be able to handle a good scary movie, but even she stopped jumping after the first big boo. And the only reason we even jumped at that one was because whoever was sitting behind us screamed like someone had been personally attacked. Good thing this one isn’t in 3D, we may have had to call the individual an ambulance. And therein lies the film’s biggest hindrance: its PG-13 rating. The film is sure to scare the pants off of someone, but anyone who’s seen any horror movie before will know exactly what’s coming way before it finally does. And you would hope that at a mere 81 minutes it would at least fly by. But this thing is a huge snooze fest with one of the lamest villains ever. There’s also no rhyme or reason to where it is or how it got there.

I will give Sandberg credit for a pretty cool idea, even if he butchers extending it to feature length. There’s also a scene involving Diana and a gun that is pretty neat. But there’s no denouement, no real climax, and for how much sleuthing Rebecca does, there’s absolutely no explanation whatsoever. The film just simply ends. It’s another long line of bad horror that was cheap to make and will make a killing opening weekend ensuring an even worse sequel, before it winds up on Netflix where you at least are only out your time. However, sometimes that’s the worst thing you can waste on a bad movie of any kind. Lights Out will go down as not just one of the year’s worst horror films, but as one of the worst period. If you were thinking of seeing this one alone, don’t. Literally. Do not see this movie.