The perfect way to kick the blockbuster season into high gear before Summer of Awesome 2015 finally arrives. Made for fans of the series and audiences anxious for summer to start. 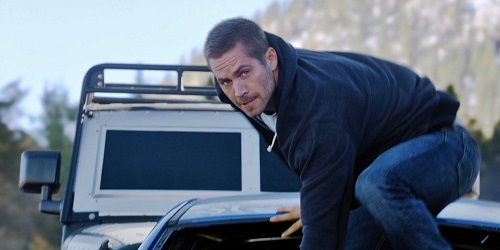 As good as the Fast & Furious franchise has become, it’s time to say goodbye. Not to the series, but officially to the late Paul Walker. And Furious 7 pulls off one of the best send offs shown  on film. I dare the most hardened fan to not get at least mildly misty eyed by the time the credits roll. Fittingly, Furious 7 winds up being the best of the series so far. Walker may be gone, but he’ll never be forgotten. And new-to-the-show director James Wan (Saw, Insidious, The Conjuring) proves he has the chops to pull off a grand farewell, along with the over-the-top spectacle we’ve all come to expect.

Picking up before Fast & Furious 6 ended, villain Deckard Shaw (Jason Statham) is visiting his hospitalized brother Owen (Luke Evans) and vows revenge on the Fast & Furious team. Back in California, Dom (Vin Diesel) is enjoying being back at the old homestead, reacquainting Letty (Michelle Rodriguez), who is still suffering from amnesia, while Brian (Walker) is trying to adjust to domestication with Mia (Jordana Brewster) and their son, Jack. Soon enough, Shaw is wreaking havoc as he puts Hobbs (Dwayne Johnson) in the hospital, kills Han (Sung Kang), and blows up Dom’s house. Now, the team must take down Shaw before he can get to them, along with the help of Frank Petty (Kurt Russell), who wants them to help find a spy weapon called “God’s Eye,” created by super hacker Ramsey (Nathalie Emmanuel).

The cast all fit perfectly into their roles, which comes as no surprise considering they’ve been playing them so long. But as this is Furious 7 there are some new additions. The best is Russell, who brings a sarcastic wit to the group and Emmanuel (Game of Thrones) seems to be sticking around for the next installment as she’s in the last scene. It’s already been announced that Russell will have a much larger role in the next one, the opposite of which we get from Johnson, who at least gets a huge fight with Statham before being relegated to the sidelines. Something I can’t help but think was another effect of Walker’s death with the production getting put on hold, Johnson’s availability may have been conflicted. And what a grand farewell to Walker. It even feels totally organic and don’t worry, Brian isn’t simply “killed off,” but it’s a fond farewell that will leave fans in tears.

Yes, the Fast & Furious franchise continues to be as convoluted as ever, but damn if it isn’t the most fun you can have in theaters right now. Director Wan may be new to the series — and action films in general — but he brings a new spark and keeps the action ramped up to 11. If you thought Fast 6 was over-the-top, you ain’t seen nothin’ yet. Chris Morgan has this series down pat since he took over writing duties on Tokyo Drift. Furious 7 delivers some of the biggest action scenes we’re likely to see all year. It’s the perfect way to kick the blockbuster season into high gear before Summer of Awesome 2015 finally arrives.