Murder on the Orient Express

A sluggish pace and disconnected tones keep this 'Murder' from chugging along. Made for only Christie's biggest fans. 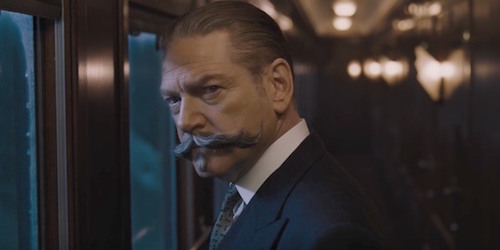 We regularly hear about casts having fun on set. Kenneth Branagh’s adaptation of Agatha Christie’s Murder on the Orient Express is no exception. Except the actors are starring in one of the year’s most boring movies. It’s happened before and it’ll happen again. It’s just sad that even Quentin Tarantino did Christie better and The Hateful Eight was only an homage. Sadly, it’s all downhill when things should be picking up the pace and don’t be surprised if you find yourself fighting to stay awake before the credits roll.

It’s 1934 and renowned detective Hercule Poirot (Branagh) is on the case at the Wailing Wall in Jerusalem. After closing, he’s on his way to relaxation, but just wouldn’t you know it, he’s soon aboard the Orient Express and a murder is afoot. With a long line of suspects — Miss Mary Debenham (Daisy Ridley) in the dining room with the candlestick, Dr. Arbuthnot (Leslie Odom Jr.) in the library with the rope, Hercule’s old friend/Express owner Bouc (Tom Bateman) in the kitchen with the poison, Hector MacQueen (Josh Gad) in the hall with the knife, or Caroline Hubbard (Michelle Pfeiffer) in the conservatory with the revolver — just to name a few. We know for sure it’s not Edward Ratchett (Johnny Depp), the unlucky victim, leaving Poirot up to his mustache in red herrings.

Screenwriter Michael Green has been involved in some great films recently (Blade Runner 2049, Alien: Covenant, Logan, and TV’s American Gods) but he’s on autopilot just as much as Branagh is. It starts of wacky — OK, so it’s a comedy — but slowly, very slowly, it starts to take itself way too seriously. If we don’t care about who gets killed, then why do we care for a second whodunnit?

Branagh plods things along, whipping his ridiculous mustache from suspect to suspect, all while you can’t help but wonder when it will finally get interesting. I’ve never read Christie’s novel, but let’s just say that even in the final roundup things get more convoluted than she probably ever could have dreamed.

It’s all parlour tricks as Branagh tries to keep you enthralled when you’re bound to be snoring. The film is way too long and doesn’t even run a full two hours. There is a lot of setup to get through and it takes forever just to get Poirot even on his fateful train ride. It also doesn’t help that our protagonist comes across as a super-serious mix of Inspector Clouseau and Ty Burrell’s Jean Pierre Napoleon from Muppets Most Wanted.

The marketing for Murder on the Orient Express has gone out of its way at making the film look classy and old school. And Branagh does manage to make a lot of it feel that way, but that’s not always necessarily the best approach. A slow burn works in these types of films. Watching this is like watching a boiling pot. Eventually you’re going to tune out and wonder what else there is to do making this Murder on the Orient Express not worth punching your ticket.