Not just the best 'X-Men' film so far, it will stand as one of the year's best as well. Made for Wolverine fans who have been waiting for a real Wolverine outing.

Rated R for strong brutal violence and language throughout, and for brief nudity. 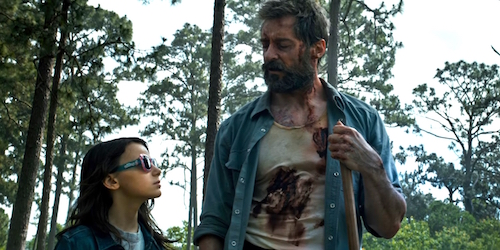 It’s been a long time coming, but Wolverine fans finally get the film they — and the beloved character — deserve. Logan is perfect. A lot of people hated X-Men Origins: Wolverine, and for good reason. It was a mess from beginning to end.

Ironically, now we’ve been treated to both an R-rated Deadpool film, and Wolverine, that Marvel fans have been clamoring for. Full of foul language and gory action scenes, it feels jaw-dropping, even if because audiences may have worried they’d never get to see Wolverine in real action. The closest being the Unleashed Extended edition of The Wolverine. James Mangold managed to create a much better director’s cut than even the fun theatrical release — filled with the gore and profanity we yearned for. But it was never shown on the big screen.

Now, Mangold is back, and completely unleashed, and the rest will be history.

Logan (Jackman) is trying to make a living as a driver in 2029 where mutants are nearly extinct. He hides out at an abandoned Mexico facility with Charles Xavier (Patrick Stewart) and the albino mutant Caliban (Stephen Merchant). Charles has been suffering from seizures and is growing older by the day, but claims he has been communicating with a young mutant who needs help. Along comes Gabriela (Elizabeth Rodriguez), herself being sought after by Pierce (Boyd Holbrook), who needs Logan’s help getting Laura/X-23 (Dafne Keen) to North Dakota. Here, a sanctuary called “Eden,” may be her last hope for survival. It sets a road trip in motion after Laura takes out Pierce’s crew, forcing Logan, Charles, and Laura to go on the lam.

The years have been mostly kind to the X-Men franchise. The original film — nearly 17 years old now — paved the way for a new kind of superhero movie. Read: films that worked! There have been at least a few fumbles along the way — X-Men: The Last Stand, Origins and, to a certain extent, even Apocalypse — but when an X-Men movie works, it really works. Logan is without a doubt, the best X-Men film ever. And not just because we finally get all the gore and swears. Here’s a superhero movie filled with way more emotion than you’d ever expect.

Everything comes together spectacularly. Mangold proves he can deliver the character pieces he’s known for, while melding with the comicbook genre. The cast is Grade-A solid. Even Holbrook is a great foil to both Logan and Laura. It’s really hard to keep from venturing into spoiler territory. But let’s just say that audiences are in for some huge surprises, and also some not-so-surprises. Not that that’s a bad thing, but there are a few things that are not hard to realize are coming. The best part is Keen’s X-23 is the biggest little badass we may see on screen all year — at least in theaters. Eleven still rules the small screen. Believe the hype machine, Logan is one of the best comicbook films of all time and will undoubtedly stand as one of 2017’s best films. It’s going to be a long two weeks until I can finally see this one again.