Tarantino goes Agatha Christie with spectacular results. Made for a total blast from start to finish, filled with some of the year's best performances, gorgeous cinematography, crackling dialogue, and Tarantino continuing to fire on all cylinders. 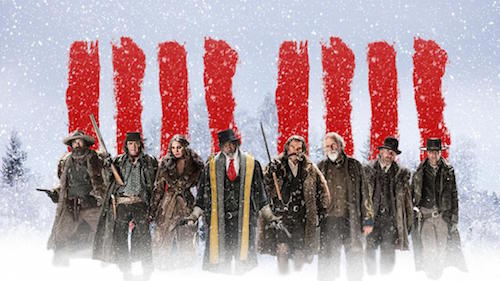 The only movies I’ve tried to keep from showing my bias toward this year are Jurassic World and Quentin Tarantino’s The Hateful Eight.  I have a tried and true love for each and every one of his masterpieces. Case in point: I have a dog named Beatrix Kiddo, and I own a complete set of the eBay-banned Django Unchained action figures from NECA. As for Tarantino, there aren’t very many filmmakers who can create their own complete universes every time they make a movie. They all revolve inside the same one, really — his. Never scurred to wear his inspirations on his sleeves, Tarantino is the master of his film domain and The Hateful Eight only proves that the man truly is an unstoppable force of nature.

Some time after the Civil War — and broken up into five chapters — bounty hunter John Ruth (Kurt Russell) is trying to beat a snowstorm while bringing in his latest fugitive, Daisy Domergue (Jennifer Jason Leigh). Along the way, John picks up Major Marquis Warren (Samuel L. Jackson) and Chris Mannix, the new sheriff of Red Rock. Knowing they aren’t going to arrive in Red Rock, they make for Minnie’s Haberdashery where they shack up with Oswaldo Mobray (Tim Roth), Joe Gage (Michael Madsen), Bob (Demian Bichir), and General Sandy Smithers (Bruce Dern). It doesn’t take long before Ruth and Warren call shenanigans on the situation and discover that they may be in over their heads and someone, or everyone, may not be who they claim with ulterior motives.

Yes, Tarantino has gone and made another western. But don’t let that fool you into thinking it’s an incidental sequel to Django Unchained. The Hateful Eight is a beast all its own and it’s firing on all cylinders from the opening credits, right up until the bloody ending. Don’t think that’s giving anything away now, this is a Quentin Tarantino film after all. The cast is having a ball delivering the year’s best screenplay, with monologue after monologue just waiting to be memorized by the most savvy filmgoer. This is also the year’s best looking film. As much as I loved the cinematography of The Revenant, Robert Richardson and Tarantino take full advantage of their 70mm film stock. While I wasn’t lucky enough to see the film as intended, the digital theatrical cut still looks incredible.

The Hateful Eight also features one of the year’s best scores with Ennio Morricone giving Junkie XL a run for their money after Mad Max: Fury Road. It saddens me that I wasn’t able to take in the film’s overture or intermission, but Morricone has delivered a tried and true classic film score. The surprises come fast and furious, which may sound like the biggest shock considering the film’s length. Even at 168 minutes — with the Roadshow running over three hours — this is Tarantino’s least indulgent movie, but yet his most satisfying. That’s not to say it isn’t without its own set of Tarantino Easter eggs.

Long story short, this is the big one I’ve been waiting for all year and it never disappoints. There have been a lot of really good films in 2015, but this takes the cake. It’s the absolute best. And before you cry “fanboy” on me, just make sure you give the film the chance it deserves. Never boring and keeping the audience on their toes for that long is no small feat. Plain and simple: The Hateful Eight is the best damn film of the year.