Charming and hilarious, repeat value abounds, thankfully it's on Disney+ to help with that. Made for Pixar fans and anyone looking to beat the heat indoors. 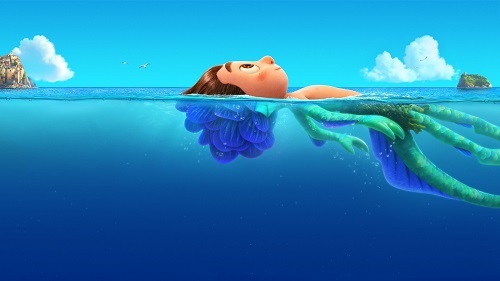 Not every Pixar film can live up to the heavy standards of their glory days. When looked at individually — rather than based on the studio’s whole — some are definitely better than others. Last year we got two from the animated studio — Onward and Soul — and they couldn’t be any different. Soul was one of the year’s best films, while Onward I haven’t even taken time to share with my three and a half year old. While Luca may not be aiming for Best Animated Feature heights, it has incredible repeat value — I’ve watched my screener twice now — with lots of spunk and attitude and heart to keep everyone in the family entertained.

Luca (voiced by Jacob Tremblay) is a “sea monster” who lives a quiet life, shepherding goatfish for his parents, Daniela (voiced by Maya Rudolph) and Lorenzo (Jim Gaffigan), off the coast of Italy. One day, Luca meets another “sea monster,” Alberto (Jack Dylan Grazer), who whisks him on land for surface shenanigans. Eventually, the duo becomes a trio after they make friends with Giulia (voiced by Emma Berman), who is spending the summer with her father, Massimo (voiced by Marco Barricelli). Soon enough, they set their sights on winning the annual Portorosso Cup race so they can use the prize money to buy a Vespa and travel around the world. That is unless the local bully, Ercole (voiced by Saverio Raimondo), can stop them.

At just a brisk 95 minutes, director Enrico Casarosa — Oscar-nominated for the Pixar short La Luna — and his writers, Jesse Andrews (Me and Earl and the Dying Girl) and Mike Jones (Soul), pack a huge punch with quotable dialogue, hilarious visuals, and a huge heart. The voice cast is perfect, with Tremblay, Grazer, and Berman hilariously playing off each other, with the adults joining in as well. Luca never tries to raise the animation/story to new heights. It’s a little more cartoony than we’re used to from Pixar, which helps aid in the fun and makes for a nice change of pace. It also allows our trio of daydreamers — and audience — to learn some life lessons, have a few laughs, and entertain everyone in the family.

Luca is being released exclusively on Disney+ for all subscribers.