It may be streaming exclusively on Disney+, but even Pixar at home is just as good as Pixar in theaters! Made for Pixar fans, families looking for some at-home entertainment, and teens looking for representation. 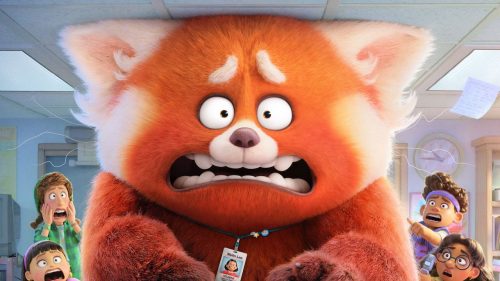 Pixar, never one to shy away from mature themes, always finds a way to suckerpunch us with deeper issues than advertised. Turning Red is no exception. Centering on the trials, tribulations, and shenanigans of a 13-year-old girl, it’s a good thing the film comes from two women — director/writer Domee Shi and co-writer Julia Cho — or it would instantly lose all credibility. With some slightly new animation styles up her sleeve, Shi gives us an engaging, endearing, heartfelt, and hilarious ride through the life of a teenager marching her way to womanhood.

Meilin “Mei” Lee (voiced by Rosalie Chiang) enjoys her 2002 life in Toronto filled with overachieving at school, helping her mom, Ming (voiced by Sandra Oh), at their Chinese temple, hanging out with her friends — Miriam (voiced by Ava Morse), Abby (voiced by Hyein Park), and Priya (voiced by Maitreyi Ramakrishnan) — pining over Devon, and obsessing over her favorite boy band, 4*Town. But wouldn’t you know it, a family curse comes calling and now, whenever Mei experiences intense emotions, she turns into a giant red panda. A ritual can lift the curse, but timing is everything and nothing ever runs the way you want it to — especially when you’re a teenager. Now, Mei has to find a way to lift the curse, and find tickets to the 4*Town concert, while trying to contain herself as she juggles the struggles of expectation vs reality.

Coming from the director of the Oscar-winning Bao short, it’s fantastic to see Shi make the leap from shorts to features with such ferocity. Turning Red is everything we’ve come to expect from Pixar and it’s nice to have another original feature as they continue to veer away from sequels. Basing the film on her own experiences helps Shi come out swinging, hitting another Pixar homerun. Filled to the brim with hilarious 2002 references — flip phones and Tamaguchi run rampant — Shi also comes armed with some awesome new animation styles pushing Pixar beyond their usual greatness. This is all while maintaining the standard we’ve come to expect, hilarity ensues as life lessons learned and heartstrings pulled.