Never as charming as it thinks, with leads who have zero chemistry, and a "twist" you'll see coming a mile away! Made for suckers willing to pay to see a Lifetime/Hallmark movie on the big screen. 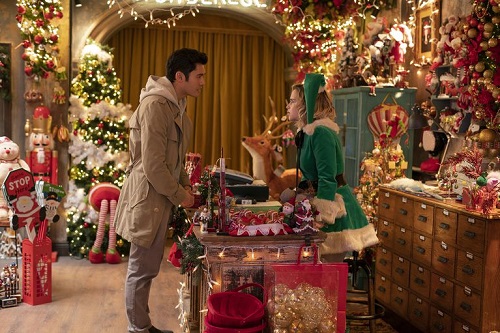 To quote my review of Paul Feig’s A Simple Favor: “The heightened sense of reality plays like the funniest big budget Lifetime version of Gone Girl you could hope for.” With Last Christmas, Feig left nuance at the door and simply made a Lifetime/Hallmark movie. If there ever was a Feig film designed purely for Netflix, this is it. Light on laughs, sitcom in execution, and overloaded with George Michael earworms, Last Christmas proves it takes more than just a Christmas setting to provide a holly jolly spirit.

Kate (Emilia Clarke) is not living her London life to the fullest. Having recently recovered from being sick, she struggles to keep her job as an elf at a year-round Christmas store and bounces around friends for places to stay. Her boss, “Santa” (Michelle Yeoh), misses the old Kate and knows she’s capable of more.

Her family — sister Marta (Lydia Leonard), father Ivan (Boris Isakovic), and mother Petra (Emma Thompson) — wish she’d get her act together and make the most of their escape from Yugoslavia. And just when it seems like things can’t get any worse, Kate meets Tom (Henry Golding), who could be the man of her dreams. Now, Kate may have a reason to find a new lease on life, with Tom possibly being just the ticket to a new standard of living.

If that doesn’t sound overly schmaltzy, just wait till you see the movie. Even the most mediocre romantic-comedies can get by on the power of its stars. Unfortunately, Clarke and Golding have zero chemistry which indicates a big twist is coming. A twist you’ll be able to guess from a mile away if you watch any of the film’s trailers, which I had not. Another giveaway comes in the form of the title song, played ad nauseum throughout the film.

Sitcomy by nature, and never as charming as it thinks it is, Last Christmas isn’t one of the worst Christmas films ever, but boy is it one of the dumbest. It’s extremely boring, too. When you never care for your protagonists, it makes any film a huge chore to sit through. Thompson’s clichéd “Boris & Natasha” accent doesn’t help either, and that’s exactly the kind of comedy Feig falls back on here.

You’d never guess this is the same director who brought us Freaks and Geeks, Bridesmaids, The Heat, Spy, Ghostbusters, and A Simple Favor. Hopefully, Last Christmas winds up as a mere blip on Feig’s record. Considering his next film involves a mashup of the classic Universal monsters — and comes from his own writing — hopefully that returns him to his usually brilliant brand of filmmaking.