File this one under “Ghosts of Christmas Movies Past.” Made for suckers of raunchy Christmas movies and hardcore T.J. Miller fans.

Rated R for crude sexual content and language throughout, drug use and graphic nudity. 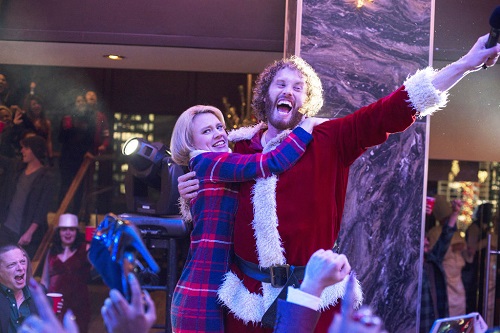 As much as I love Christmas movies, they aren’t all created equal. While the list of classics is nice and long, every once in awhile we get a dud. Just last year we got one outrageously hilarious, The Night Before, and one absolutely horrific, Love the Coopers. This year we get another duo of Christmas movies and once again, one is way better than the other. The good news is, Office Christmas Party is no Love the Coopers. The bad news, it’s no Night Before either.

Directors Josh Gordon and Will Speck are no strangers to comedy, but they can’t ever seem to make one worth remembering. Falling right alongside their previous efforts — Blades of Glory and The Switch — only the most hardcore Will Ferrell fans will remember Blades and you’d be hardpressed to find anyone who even saw The Switch. One thing is for sure, Gordon and Speck must have loved working with stars Jason Bateman and Jennifer Aniston because the band is back together again, but the results are as lackluster as ever.

Data storage company Zenotek is getting ready for the holidays. None more so than branch president Clay Vanstone (T.J. Miller) as he is hard at work putting the finishing touches on this year’s holiday party. Leave it to Clay’s ballbusting sister Carol (Aniston) to try to ruin the fun. After closing the Florida branch, she’s set her sights on Clay’s in a case of bitter sibling rivalry. Lucky for Clay, he’s caught wind that a potential client, Walter (Courtney B. Vance), is in town and Carol gives him one more day to save himself and his employees. Now, Clay joins forces with his Chief Technical Officer Josh (Bateman) and their smartest employee, Tracey (Olivia Munn), to save the branch and have the greatest non-denominational holiday mixer ever.

Probably the biggest problem with Office Christmas Party is the amount of subplots Gordon and Speck try to juggle. Besides Clay’s misadventures, the film is also stuffed with Josh dealing with his divorce and a possible office romance with Tracey, Clay’s admin Allison (Vanessa Bayer) bouncing between her own romances with Fred (Randall Park), and Nate (Karan Soni) who is also embroiled with an escort (Abbey Lee) and her pimp, Trina (Jillian Bell). And there’s also a constant battle with HR, in the form of Mary (Kate McKinnon).

The few bright spots are unsurprisingly delivered by Miller, McKinnon, and Bell. As for the rest of the cast, they’re left grasping at straws with the writing trio of Justin Malen, Laura Solon, and Dan Mazer guilty of one of the least funny screenplays of the year. It’s already been a rough year for comedies, but you can’t blame the cast for trying. Miller almost singlehandedly saves the movie. Almost. I love Christmas movies, but Office Christmas Party is no new classic and I doubt I’ll ever revisit it. File this one under “Ghosts of Christmas Movies Past.”