Disney delivers another Pixar-level winner. One of the most perfect family films since 'Inside Out.' Made for anyone and everyone!

Rated PG for some thematic elements, rude humor and action. 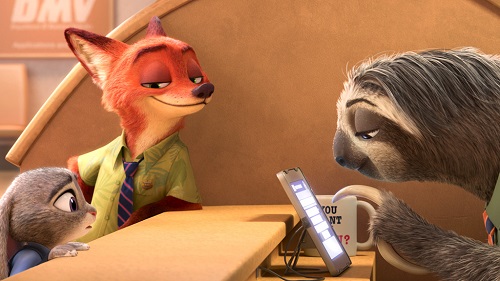 If Zootopia is a sign of how 2016 is going to play out for animated features, it’s going to be an amazing year. Hats off to Disney for delivering what will undoubtedly wind up as one of the year’s most heralded animated films, and one of the best films of the year so far. Possibly too smart for most, but never too dumb for the rest, directors Byron Howard (Tangled and Bolt) and Rich Moore (Wreck-It Ralph, Futurama, The Critic, and The Simpsons) — along with co-director Jared Bush — deliver a fully-realized animated endeavor.

Everyone knows it’s always been predators vs. prey, but in Zootopia, the animals have evolved into anthropomorphic extensions of our everyday life. In Bunny Burrow, young Judy Hopps (voiced by Della Saba), dreams of something more than growing up to be a carrot farmer. Her parents, Bonnie and Stu (voiced by Bonnie Hunt and Don Lake), try everything they can to keep her expectations in check. But after a scuffle with Gideon Grey (a fox), it just makes her even more empowered and, as an adult (voiced by Ginnfer Goodwin), joins the Zootopia police academy to become the first bunny cop ever.

Moving to the big city, she’s ready for her first day, and gets assigned meter maid. Lucky for her, she runs into the sly Nick Wilde (voiced by Jason Bateman) — her arch nemesis: a fox — she hustles him into helping her when the two stumbleupon what’s really behind the 14 missing mammal cases that Chief Bogo (voiced by Idris Elba) assigned to everyone else. And just wouldn’t you know it, the case is bigger than she ever dreamed and may even reach as far up as involving Mayor Lionheart (voiced by J.K. Simmons)! Now, Judy has 48 hours to solve the case or hand over her badge.

For anyone who thinks Zootopia looks like just another run-of-the-mill Disney outing, boy are you in for a treat. This is a slick neo-noir throwback disguised as a family-friendly kid flick. Not that it isn’t family friendly — obviously it is — but this one is for the rest of us in the crowd: the adults. While there may be plenty of fluffy, loveable characters kids will demand to be bought — I admit, there is quite a bit of merchandise I want myself — there is an overwhelming essence to the film that makes this exactly that: a film.

Far more than just something to keep kids occupied, adults are bound to enjoy this even more than whatever youngster they bring with them. Case in point, what other animated film is daring enough to squeeze in a Breaking Bad reference? They even find time to spoof their own films that haven’t even been released yet. Chock full of clever wordplay, character arches, visual gags, and movie spoofs, this is the smartest and funniest animated film since Inside Out. Zootopia is a smashing success all around, and I can’t wait to see it again!

And a quick round of applause to the directors and writers for daring to wrap their film around a message about not just believing in yourself — because what animated film isn’t about that — but also around such hot button topics as female empowerment, police brutality, and the dangers of profiling. Never bashing the viewer over the head, it’s great to see a movie where it just wants everyone to get along. There’s no better place to plant the seed than in something the young will watch multiple times. And considering they’re bound to watch Zootopia over and over again, maybe this will be one lesson they’ll actually pay attention to.