Spectacular effects and good old-fashioned adventure provide perfect family entertainment. Made for anyone and everyone!

Rated PG for some sequences of scary action and peril. 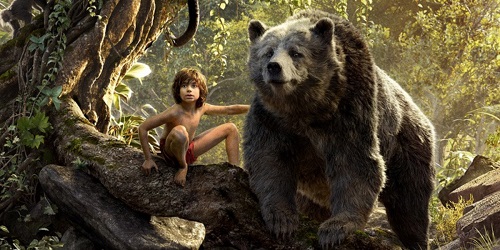 I haven’t been the biggest fan of Disney’s live-action remakes of their animated classics. The only failure has been Maleficent. Considering how much I love the 1967 animated The Jungle Book, I wasn’t sure what to expect with this remake. Considering it’s written by Justin Marks — whose only big screen credit has been Street Fighter: The Legend of Chun-Li — all I had to count on was Jon Favreau’s direction. Favreau has a history with high flying adventure — the first two Iron Man films — and family-friendly — Elf and Zathura. People can say what they want about Cowboys & Aliens, but the man has yet to direct a bad film. And with The Jungle Book, his record remains untarnished.

Audiences know Rudyard Kipling’s classic story. This isn’t even the first time Disney has made a live-action effort — they also let The Mummy’s Stephen Sommers have a crack at it back in 1994. But boy how times have changed. Although the story may remain the same, we now get a tried and true adventure with Mowgli and friends thanks to tip top direction, superb voice casting, and spectacular special effects. Mowgli (portrayed beautifully by newcomer Neel Sethi) has been raised by wolves Raksha (voiced by Lupita Nyon’o) and Akeela (Giancarlo Esposito) in the jungle.

But the return of Shere Khan (voiced by Idis Elba) forces them to set Mowgli on a path back to the man village. Bagheera (voiced by Ben Kingsley) leads him on his quest, but not before they get separated and Mowgli gets taken in by Baloo (voiced by Bill Murray). Baloo wants to keep Mowgli around to use his man tricks to score honey, while Bagheera knows he must get Mowgli to safety. And of course, the jungle is full of other dangers such as Kaa (Scarlett Johansson) and King Louie (voiced by Christopher Walken) who still just wants man’s red flower.

You want adventure? Check. Humor? Check. A case of the feels? Check. Favreau and Marks even manage to throw in a few good jump scares as well. Yes, The Jungle Book is everything we could ask for in live-action adaptation and puts Cinderella to shame. While the target audiences may be a little different, it’s still a Disney movie which means it’s the same demographic: families. Cinderella, Maleficent, and Alice in Wonderland may skew more female, this one is for everyone — even young and old alike. Who doesn’t want to head into the jungle and tag along with Mowgli on his adventures? To say how fantastic the film truly is, the screening I attended wasn’t shown in its correct aspect ratio, had a questionable 3D projection, and muddied sound, yet I still loved it!

On top of Favreau’s direction and Marks’ swinging screenplay, the voice cast are having a ball. You can tell they’re relishing bringing such beloved characters to life, even if Johannson may go a little underused with Kaa only appearing in one scene. Sethi, Kingsley, and Murray get a ton of mileage out of their rapport, even if computer-animated. And man, what CGI it is. Every character is so photo realistic it makes Life of Pi look antiquated. The only exception are the wolf cubs. I was initially worried that the animals were going to be talking, but it’s surprisingly believable. Never once do you question that you’re watching talking animals. We’ve come a long way from the days of Babe and Gordy.

Now a note to parents, The Jungle Book has never been known for not being violent. The whole plot revolves around a tiger trying to kill a child for pete’s sake. While it may be easier for kids to gloss over what’s happening onscreen, it obviously feels even more violent in live-action. Not to say the film should be rated PG-13, but there are some really good jump scares — especially featuring Shere Khan — and they could be even scarier in 3D or on a giant IMAX screen. That being said, Favreau and Marks do make sure to keep plenty of levity to the situation and never gets as dark as Batman v Superman. Bet you can guess which one is way more fun. “The Bare Necessities,” “Trust in Me,” and “I Wan’na Be Like You” even made their way in.

Suffice to say, The Jungle Book is never short on entertainment and will easily go down swinging as one of the year’s biggest crowd pleasers. And with the sequel already announced, I can’t wait to see where Favreau and company take us on Mowgli’s next adventure.