Kubo and the Two Strings

Spectacular animation does not a masterpiece make. Made for Laika fans, or the most forgiving martial arts fans. 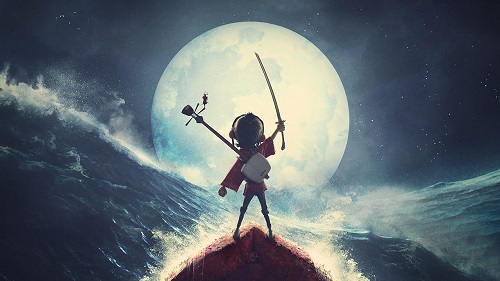 The one animated film I had the highest hopes for this year was Laika’s Kubo and the Two Strings. Backed by a studio that just seemed to get better with each film — Coraline, ParaNorman, The Boxtrolls — and the fact that it was seeped in Asian folklore, I was sure it would blow me away. Unfortunately, the film is surrounded by tremendous hype, and I hate to be the killjoy, but Kubo is not the best animated film of the year.

Sure, it may be full of gorgeous animation and is an exquisite visual feast, but Marc Haimes and Chris Butler’s screenplay — paired with Travis Knight’s direction — never provides anything more than what I’ve already seen countless times after watching years of martial arts movies. I thought Laika would be able to dethrone Disney this year; this could be the one. Unfortunately, Zootopia still stands as the year’s best animated feature so far. Even if not for a lack of trying.

The convoluted storyline begins with our young hero Kubo (voiced by Art Parkinson) telling a story about himself and his mother. Washed ashore after what appears to be an exhausting battle, we learn that they have made an escape from a treacherous family, with Kubo’s grandfather going so far as to steal his left eye. After years of caring for his invalid mother, Kubo earns what little money they have by telling magic origami tales at the local village.

It’s not too long before his evil Aunts (voiced by Rooney Mara) come calling and burn the village to the ground. Kubo’s mother uses the last of her magic to save Kubo, and brings to life his talisman Monkey (voiced by Charlize Theron). Together, the two must face Kubo’s destiny to defeat the evil Moon King (Ralph Fiennes), with the help of the slapsticky warrior Beetle (voiced by Matthew McConaughey).

It really does sadden me that the film never manages to live up to the sum of its parts. The most annoying aspect may be how serious the film takes itself. There’s barely any kind of pulse or sense of humor running through its veins, making it a bit of a chore to sit through. Laika is no stranger to releasing visually stunning films, and Kubo still is, you just never care for anyone’s plight, no matter how deadly the circumstances.

Knight has worked on all the previous Laika productions so he knows how to make the stop-motion look as good as humanly possible, but Haimes and Butler don’t really give him a whole lot to work with. Considering Butler singlehandedly wrote ParaNorman, he was probably brought in to try to spitshine a final draft. Anyone who’s ever watched a family film — or any kind of martial arts film — will quickly catch on to the heavy foreshadowing, leaving no surprises of any kind.

It also feels like a martial arts film with barely any action in it. It’s almost like a Lord of the Rings for families. Not that it’s a completely bad thing, there’s just not enough heart, and nowhere near enough entertainment, to save the film from drowning in its visual splendor. We need more to keep our interest. All we’re left here is a film more along the lines of Coraline, where the studio seems far too eager to try and be the coolest looking movie of the year, while leaving the story bits sprinkled along out of necessity.

With awards season on the horizon, I’ll definitely be giving it another shot. I really wanted to like Kubo and the Two Strings, it just never gave me any real reason to. Spectacular animation does not a masterpiece make.