No one will leave the theater without a smile on their face and a song stuck in their head. Made for everyone! 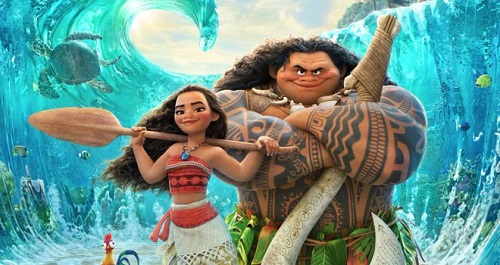 Disney has been in the princess movie a long time, so it’s surprising it took awhile to make them strong, independent characters. The tides have certainly changed since the days of Snow White, Cinderella, or even Ariel. Their newest addition, Moana fits right in, standing as their best yet. While not meant as a slight against the likes of Jasmine, Tiana, Merida, or power sisters Anna and Elsa, Moana is by far the clear winner.

Headstrong, and with no love interest in sight, Moana is here to stake her claim as a force to be reckoned with. It helps that directors Ron Clements and John Musker know a thing or two about the Disney formula. They are the duo behind The Great Mouse Detective, The Little Mermaid, Aladdin, Hercules, and The Princess and the Frog after all. With the help of Hamilton creator Lin-Manuel Miranda co-writing a host of earworms, they pull out all the stops, delivering one of the year’s best animated films.

On a mystical Polynesian island, we meet infant Moana as she is enchanted by her Gramma Tala’s (voiced by Rachel House) stories of demigod Maui (voiced by Dwayne Johnson). Maui stole the heart of Te Fiti causing the islands to slowly wither and die out. As a teen, Moana (voiced by Auli’i Cravalho) is fighting an internal struggle between doing what’s best for her island versus her inner yearnings. Moana, with a push from Gramma Tala, knows she’s destined for more. It comes calling after the ocean hand picks her to take to the high sails to track down Maui and restore peace to the islands.

As much as I was hoping I could tout Moana as the best animated film of the year, I suppose I have to call it a draw against Zootopia. While the latter may find itself with the better story, Moana has a fighting spirit, and girl power to spare. Combined with Miranda’s amazing songs — co-written by Opetaia Foa’i and Mark Mancina — it’s hard to declare a clear winner. But it is a fantastic twofer year for Disney. Packed with some of the year’s most eye-popping animation, Clements and Musker — along with co-directors Don Hall and Chris Williams — bring Jared Bush’s (who also co-wrote Zootopia) creative screenplay to breathtaking life.

Moana also features some of the year’s most memorable characters, including a few animal sidekicks like Pua the pig and Heihei the chicken (voiced by Alan Tudyk no less), no one will leave the theater without a smile on their face and a song stuck in their head. Special mention goes to “The Rock” for performing his own hilarious demigod song and Jemaine Clement nearly stealing the whole movie . The young Cravalho stands tall against Johnson and the two make a hilarious vocal pairing. Everything just works superbly here, and in the words of Maui himself, “you’re welcome.”