You Won't Be Alone

More brains than guts, another fantastic entry to the "elevated horror" subgenre. Made for fans of what's considered "elevated horror," or audiences looking for something more than gore. 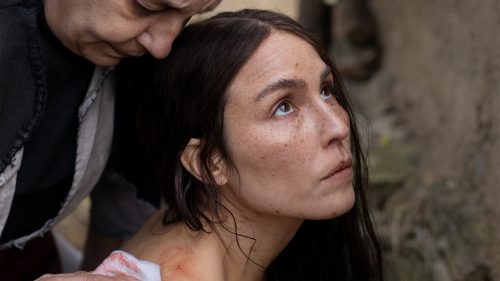 The term “elevated horror” gets thrown around a lot these days. A subgenre that fans take too seriously due to its reliance on drama over blood and guts. Horror will always be horror, but its subgenres, including elevated horror, has just as many hits as misses. The biggest issue with these films is their inability to stick the landing. It Follows and The Babadook are two  failures when it comes to wrapping things up, while The Witch, Hereditary, and Midsommar are shining examples of when it’s done right. Now, elevated horror fans can add writer/director Goran Stolevski’s debut, You Won’t Be Alone, to the growing list of successes.

In the opening scenes, newborn Nevena and her mother are visited by a witch — “Old Maid” Maria (Anamaria Marinca) — where she is promised to Maria by age 16. Nevena’s mother proceeds to hide her in a cave and raise her feral, but sure enough, Maria returns to make good on the promise. Maria uses her “one witching spit” to turn the now grown Nevena (Sara Klimoska) into a witch, setting her on a sordid lifetime of shapeshifting and body-swapping. Jumping from Bosilka (Noomi Rapace) and Boris (Carloto Cotta), before settling into Biliana (Alice Englert), Nevena eventually learns that not all is as it seems, folklore can have dire circumstances, and human nature is something both yearned and learned.

You Won’t Be Alone manages to present a fantastic character arc with Nevena never feeling like she’s in the right body, while simply trying to find some place she truly belongs. She doesn’t try to rid herself of her curse, and instead make peace with it. All of the actors give fantastic performances and you do have to remind yourself through some of it that the characters are inhabited by a 16 year old with absolutely no understanding of the world aside from her time alone in the cave. It’s especially important considering some of the subtitling.

The film never shies away from some good, bloody moments, but spends the majority of the film letting Nevena’s layers continue to peel as her character comes to terms with her destiny. As I mentioned before, the ending you can start to see coming as the final scenes start to pile up, but it ends exactly as it should and never cheats the audience. It’s something you don’t see too often in the land of “elevated” horror, which only helps give it an even bigger impact. You Won’t Be Alone is exactly the kind of horror movie we expect from Focus Features (much like A24) — not to mention it premiered at this year’s Sundance — and it’s nice to see the studio continuing their effort to deliver horror movies that are every bit as smart as they are unsettling and/or scary.