This is the real deal. One of the scariest films ever made, make sure you wear your brown pants. Made for horror aficionados and art house creepfest fans. 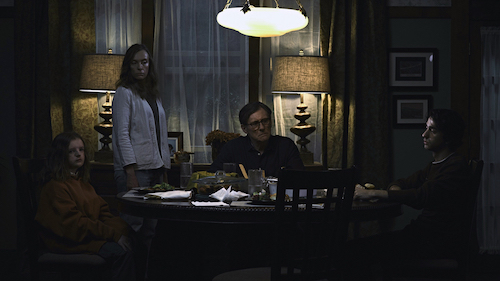 No genre is more subjective than horror. What scares one person sends another into a fit of giggles. But when great horror comes along, it’s a force to reckon with. Hereditary is the horror film aficionados need. I hope the days of found footage are gone for good. Divisive by nature — The Babadook, It Follows, The Witch — they rely on more than gore and cheap jump scares. Hereditary is the real deal. Writer/director Ari Aster may be making his debut, but if this is what he has to offer, I may not be able to handle future endeavors.

Annie Graham (Toni Collette) has just lost her mother. Along with her family — husband Steve (Gabriel Byrne), son Peter (Alex Wolff), and daughter Charlie (Milly Shapiro) — they’re all dealing with the loss in their own ways. Annie tries to draw herself into finishing her latest miniature gallery pieces, Peter wants to party, and Charlie just wants to be left alone. Steven meanwhile, tries to wrangle the family together and keep things pleasant. Soon enough, grandma’s grave has been desecrated, Charlie dies in an accident, and Annie starts acting odder by the day. Steve thinks Annie is losing it, but things take a turn for the worse after Annie meets Joan (Ann Dowd) who convinces her to conduct a seance to check in on Charlie.

There’s a lot of hype surrounding Hereditary after premiering at this year’s Sundance Film Festival. And it’s warranted. There have been plenty of horror movies that are scary enough while sitting in a theater, but this one follows you home and lingers. Just thinking about the film is enough to creep you out all over again.

Collette gives an amazing performance — the only thing not shocking — and so do the young actors Wolff and Shapiro. Aster fills the film with dread from its opening seconds and never lets go. Sitting through Hereditary was like having a two-hour panic attack. There’s even an article, after a study at several Alamo Drafthouses, which shows watching the film is the equivalent of two hours of exercise. Now that’s saying something.

Needless to say, Hereditary is the real deal and should not be missed. If you can handle it. Just make sure you wear your brown pants.