Hilarious, dark, wicked sharp, and full of surprises. It's one of the best movies you probably never heard of yet. Made for fans of smart comedic thrillers or those looking for something more than another Hollywood tentpole. 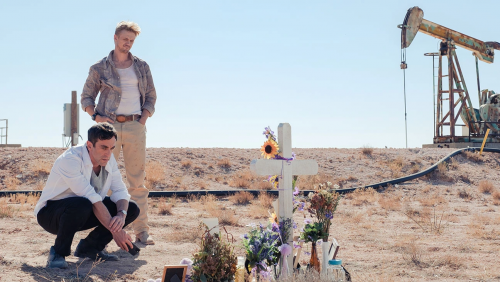 Most people probably wouldn’t think to cast B.J. Novak in a dark satirical thriller, but with Vengeance, he’s also the writer, director, and producer — so he can do what he wants. Anyone who is familiar with Ryan Howard from The Office should understand the character he’s playing instantly. But Novak has more than a few tricks up his sleeve in his indictment of right vs. left in the age of social media. He takes what could have been a very basic comedy setup and runs it through the ringer. Armed with a game cast, Novak manages to let everyone in on the fun, where the big winner is us, with Vengeance being one of the year’s smartest films yet.

Ben (Novak) lives in New York, surrounded by intelligent, narcissistic, and promiscuous millennials(?). He’s an aspiring podcaster and makes an unsuccessful pitch to uber-producer Eloise (Issa Rae). While she doesn’t love his original idea, fate comes calling, literally, in the middle of the night. A random hookup — Abilene (Lio Tipton) — has died in Texas and her whole family — brothers Ty (Boyd Holbrook) and “El Stupido” (Eli Bickel), sisters Jasmine (Dove Cameron) and Paris (Isabella Amara), along with their mother and grandmother — are convinced they were a couple. They’re also sure Abilene was murdered and persuade Ben to join their crusade for justice after Ben sells the idea to Eloise as a podcast called “Dead White Girl.” Now, everybody’s a suspect and Ben may have bitten off more than he can chew in a showdown of East versus West… Texas, that is.

It’s clear that Novak wanted to go big or go home. Rarely do we see a feature debut that starts out wickedly sharp, but also manages to somehow get smarter as it goes along. An early contender for original screenplay, Novak hits every nail on the head, leaving no stereotype unscathed on both sides of the political spectrum. And just when you think everything is all wrapped up, he manages to flip the standard noir finale on its head as well.

As amazing as the screenplay and direction is, he manages to get some fantastic performances out of his supporting cast as well. It truly works as an ensemble piece with Holbrook stealing every scene in a role he feels born to play. Charming, smarmy, hilarious, and full of good ol’ boy heart, he’s also an easy play for supporting actor nods in a few months. Even Ashton Kutcher gets a rare meaty role to play completely against type.

Vengeance is the best film you haven’t heard of yet. It’s a good reminder that even small-budget films are best enjoyed the way they were intended: shared on the big screen surrounded by like-minded folks. It’ll slap a grin on your face, make you laugh out loud, think a little, and walk out very glad you managed to catch it. This may be Novak’s first feature, but he’s clearly running the show with a go big or go home approach and I can’t wait to see what he comes up with next.