Never as good as the first or third, it sets up the franchise for new adventures and Thompson proves to be an amazing lead. Made for fans of the franchise and families looking for something that's PG-13, but a little more family friendly.

Rated PG-13 for sci-fi action, some language and suggestive material. 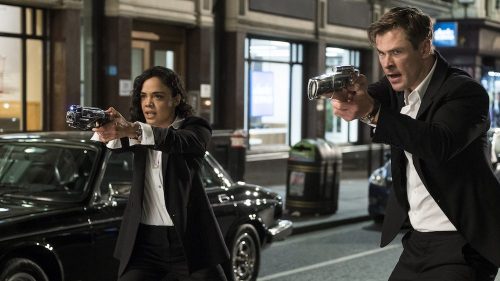 In the age of reboots, remakes, and sequels, Men in Black: International has a lot working against it. While serving as both a sequel and reboot, this new MIB is really just more of the same. What that means to you will definitely make up your mind in a hurry. However, it still manages to at least provide what we’ve come to expect: fast paced and funny.

MIB:I may not have the blessing of Will Smith or Tommy Lee Jones’s presence, but Tessa Thompson makes a fantastic lead. With Chris Hemsworth by her side, the two show they have just as much chemistry outside the Marvel Cinematic Universe. While director F. Gary Gray continues his streak of entertaining the masses without delivering anything new.

Molly (Thompson) has spent her entire life trying to track down the mysterious Men in Black. After tracking down a fallen spaceship, she follows them back to headquarters and walks right in, only to be swiftly found out, interrogated, and placed on a probationary period as a new trainee by Agent O (Emma Thompson). After all, she found them. Now, Molly has become Agent M and forces her way into Agent H’s (Hemsworth) assignment showing the alien Vungus (Kayvan Novak) a night out on the town. But not before Vungus is killed by the Alien Twins (Laurent and Larry Bourgeois) and passes off what they were looking for to the only person Vungus trusts: M.

If there’s one thing this MIB entry has going for it, it’s nostalgia. Those of us who love the franchise will enjoy every minute of it. Even if screenwriters Matt Holloway and Art Marcum stick to a very tried and true formula. Agent M is a great replacement to fill Jay’s place and thankfully, Agent H never tries to make up for Kay. The jokes may feel few and far between, but watching Thompson and Hemsworth play off each other is always more fun than most character interactions. The two make a fantastic duo and keep the series geared up for more adventures.

As great as the leads are, the supporting cast steal the show. Emma Thompson is as dryly hilarious as she was in 3, but Kumail Nanjiani as the tiny alien Pawny looking for a queen to protect winds up being the best — and funniest — character in all four movies. Unfortunately, they aren’t all winners. Rebecca Ferguson is completely wasted in a former love-interest/pseudo-villain role. And Liam Neeson looks like he sleepwalked his way on set. The Men in Black films are always a safe bet and with Thompson making an admirable leap to lead, it should be interesting to see what further missions she may embark upon.