A boring repeat of Neeson's film past. Made for only the most hardened Neeson fans.

Rated R for strong violence, language including sexual references, and some drug use. 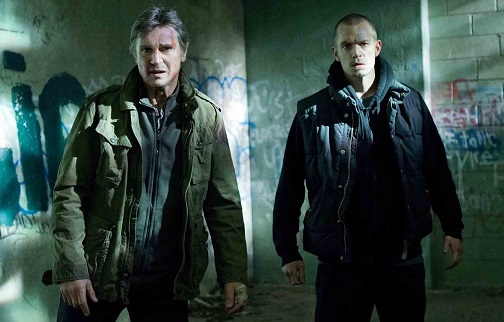 I can’t help but feel bad for Liam Neeson. While he’s made a new name for himself as the go-to “badass” these days, they’re all starting to look mighty familiar and Run All Night is no exception. Working with the director of Unknown and Non-Stop again should have worked in his favor, but let’s face it, Jaume Collet-Serra has never had a great eye for action. Brad Ingelsby’s screenplay may try to create above average stock characters, but it’s merely the cast that keeps Run All Night from completely falling apart as it reaches its breaking point at a way too long 114 minutes.

In this edition of the Neeson-of-the-Month Club, we meet the alcoholic, down on his luck variation in Jimmy Conlon (Neeson). Estranged from his limo-driving son Mike (Joel Kinnaman) after the passing of Jimmy’s wife five years earlier, Jimmy now has to rely on doing odd jobs for Danny Maguire (Boyd Holbrook), like playing Santa at a Christmas party. Danny happens to be the son of his former boss/childhood friend Shawn Maguire (Ed Harris).

One night Mike is on the job escorting unbeknownst two Albanian men to a drug deal with Danny who winds up shooting both of the men. Outside, Mike and his teenage boxing protege witness Danny shooting one of them on the sidewalk. Now, Danny needs to play cleanup and visits Mike’s home where Jimmy winds up shooting him before he can kill Mike. Unfortunately for them, Shawn has now ordered a hit on both of them and Mike will have to rely on his father’s special set of skills to survive the night and protect his family. Only exacerbated by Shawn contracting professional killer Mr. Price (Common) to take them both out.

If any of this sounds familiar, it feels even more so as you’re watching. Director Collet-Serra provides no surprises here. And it doesn’t help that writer Inglesby provides none in his screenplay. (It worries me that this is who’s adapting the absolutely unnecessary U.S. remake of The Raid.) There may be better characterization than usual, but it probably only seems that way because Neeson and Harris are such great actors. Something that could have helped greatly in caring when characters are in danger. But the action scenes are so haphazardly edited that you never know what’s happening. It’s all just flash and noise.

This type of role we all know Neeson can play in his sleep, and it’s almost literal here. He seems to be growing weary of the role, but at least he’s still fun. Oddly, the scenes that work best are when Neeson and Harris are just sitting around waxing nostalgic. Which is what the audience is going to wind up doing after the movie, wishing Neeson was a more interest in projects than what appears to be simply the paycheck. Considering we just saw Taken 3, A Walk Among the Tombstones, and Non-Stop all within the last year. I think we can now safely say Neeson’s just stealing paychecks from audiences with Run All Night.