A Walk in the Woods

A sitcom-level "raunch fest" that resorts to f-bombs, prat falls, and clichés for laughs. I hate camping and yet taking my own walk in the woods would be more fun than this was to sit through. Made for grumpy old farts and die hard Redford fans.

Rated R for language and some sexual references 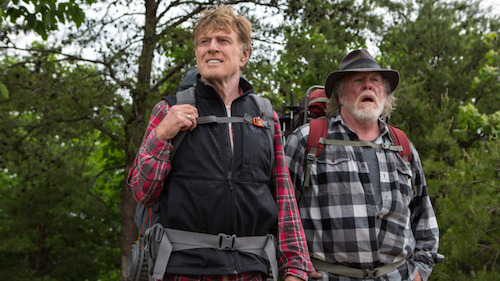 If there’s one thing director Ken Kwapis is not synonymous with, it’s quality filmmaking. The only films on his resume that are watchable are He Said, She Said, The Sisterhood of the Traveling Pants and his 1988 cult classic Vibes, starring Jeff Goldblum and Cyndi Lauper. Not to keep a good man down, he’s continually tried his hand at features, ranging from Dunston Checks In, Sexual Life, License to Wed, Big Miracle, and now, A Walk in the Woods.

I swear if it weren’t for his non-stop TV directing there’s no way he’d be granted so many gigs. You’d never know the man behind his big screen efforts was ever involved with the likes of The Office, Parks & Recreation, The Bernie Mac Show, Malcolm in the Middle, The Larry Sanders Show, and Freaks and Geeks. The man can make hilarious entertainment, but unfortunately, not even Robert Redford or Emma Thompson can salvage the scattershot mess that is A Walk in the Woods.

The Walk in question refers to the book Bill Bryson (Redford) writes after spending months hiking the Appalachian Trail with his old frenemy Stephen Katz (Nick Nolte). With his youth behind him, and only a fancy repackaging of his previous novels, Bill decides he wants to go on one last adventure before Father Time comes looking for him. Much to the chagrin of his adoring wife Catherine (Thompson), he meets up with Katz and the two head out into the great outdoors to face whatever misadventures may head their way.

If A Walk in the Woods has one thing going for it, it’s Redford. The man is usually enjoyable even in the smallest of doses, but here it starts to wear thin. If the premise sounds a lot like Grumpy Old Men Go Camping, you’re absolutely right. What you do with those two things is up to you and will definitely quantify your amusement. I suppose there is a crowd looking to hear Nolte call a group of Boy Scouts “little fuckers,” or watch Redford unknowingly flirt with Mary Steenburgen. Let alone that I completely forgot Nick Offerman is in it too. That’s exactly how wasted everyone is.

Which brings up another question: why are Steenburgen and Kristen Schaal even in this thing? They must be either really good friends with Redford or Kwapis because there’s no reason for them to be in the movie. They may provide a good enough diversion from having to watch Redford and Nolte onscreen the entire time, but they seriously serve no purpose. Especially when they’re the only two “cameos” in the whole movie. And their characters never even manage to advance the story or cause conflict. Schaal was obviously cast for her loveably annoying voice and Steenburgen is supposed to serve as some kind of possible cheat-scenario, but it’s dropped as soon as Nolte comes bumbling back onscreen with another supposedly hilarious shenanigan involving a man looking for whomever slept with his wife.

If there’s any kind of audience for A Walk in the Woods, its definitely for people of a certain age, or die hard Redford fans. Is there even such a thing? But for anyone else, first-time credited screenwriters Rick Kerb and Bill Holderman have made a huge mess of what probably could have been a silly, heartfelt romp. Who knows what the original draft by Oscar-winner Michael Arndt (Little Miss Sunshine) was, unfortunately, we’ll never know. I’m just glad I didn’t sit through it at this year’s Sundance Film Festival because there’s no way A Walk in the Woods would have kept me awake. Even as a standalone, it’s simply only as much fun as it sounds.