How to Train Your Dragon: The Hidden World

Never lives up to expectations. It's the best looking — if all-too-similar — of the franchise. Made for fans of the first two 'Dragon' films and families still looking for more entertainment with the holidays finally over.

Rated PG for adventure action and some mild rude humor. 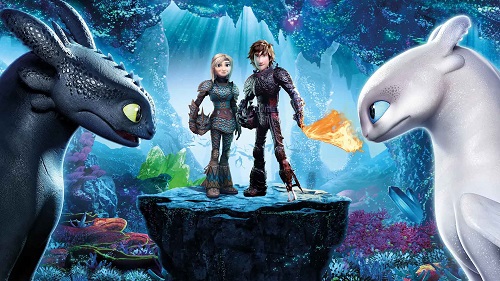 It’s been five years since How to Train Your Dragon 2 proved DreamWorks was just as capable of serving up sequels with the same relish as Pixar. Unfortunately, animated family films have come a long way since then. Hot off the heels of Spider-Man: Into the Spider-Verse, it’s been far too long since the last Hiccup and Toothless outing and How to Train Your Dragon: The Hidden World  just can’t live up to expectations.

After countless video games and Netflix episodes, writer/director Dean DeBlois has managed to make the best looking version of a How to Train Your Dragon film, but The Hidden World suffers from too little too late when it should be going out with a bang. The marketing is making a huge deal about this being the trilogy closer and while it’s nice to have a series where the characters have continued to grow and mature, it’s such a shame the same can’t be said of the story.

The Hidden World picks up after the last film with our favorite band of misfits on a “stealth” mission that winds up being anything but. Hiccup (voiced by Jay Baruchel), Astrid (voiced by America Ferrera), Snotlout (voiced by Jonah Hill), Fishlegs (voiced by Christopher Mintz-Plasse), Ruffnut (voiced by Kristen Wiig), and Tuffnut (voiced by Justin Rupple replacing T.J. Miller) have just saved a new group of dragons and brought them to sanctuary in Berk.

A new threat rears its head in the form of trophy hunter Grimmel (voiced by F. Murray Abraham). And now they must find the dragon utopia “The Hidden World,” to save their winged friends from Grimmel’s plot. Most importantly to save Toothless, whom was thought to have been the last Night Fury, only to find out Grimmel has one of his own.

The saddest aspect of The Hidden World is how much it follows the exact same beats as the first two films. There’s an opening Hiccup-monologue introducing the new dragons to Berk so the audience can get brought back up to speed. Hiccup must find a way to follow in his father’s footsteps to be the leader Berk needs. And the standard will they/won’t they relationship continues to bloom between Hiccup and Astrid with a possible marriage not too far off.

The best thing is the introduction of the female Light Fury. Toothless and Light Fury’s interactions are the star of the show and thankfully they get plenty of time to interact. Toothless finally manages to become a full bodied character presenting even more charm than ever before. Just wait till you get a load of the mating ritual scene. Hilarious, yet sweet.

How to Train Your Dragon: The Hidden World manages to hit all the right notes, it’s just too bad we’ve heard them so many times over the years from repeat viewings of the first two films. Nine years is too long to spread out a franchise into merely three films. Had DreamWorks managed to deliver this a few years ago, it would have felt more fresh. But with DeBlois simply delivering more of the same, it’s disheartening to consider the big finale to be so meh.

To answer the age old question, you really can be whelmed by a movie. The Hidden World is never bad, and it’s gorgeous to look at it, but it delivers nothing we haven’t seen before. For some that may be enough, but for those of us with higher expectations, it just never manages to be as great as it could have been either.