DC Comics continues to suffer from growing pains as they try to expand their cinematic universe with ultimately boring results. Made for only the most hardcore and forgiving Harley Quinn fans.

Rated PG-13 for sequences of violence and action throughout, disturbing behavior, suggestive content and language. 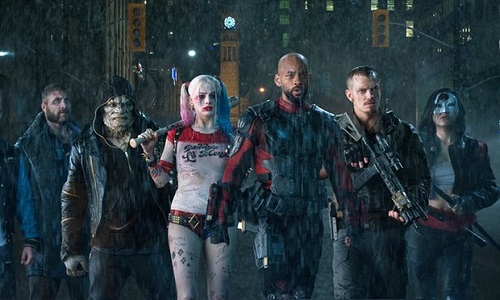 Has there been a more divisive film released recently than Batman v Superman? It’s really hard to think of one, except maybe Ghostbusters, and now Suicide Squad. While BvS may be divisive, it’s actually way harder to find someone who admittedly likes it — and can explain why — than it is to find someone who saw through every fault. Admittedly, it was a pretty damn good Batman movie, there’s no denying it failed miserably at being a Superman movie. Director Zack Snyder delivered a two-and-a-half hour muddled mess when it could have been a really good three-hour, R-rated home run.

Warner Bros. be damned, whoever is spearheading their DC Comics Extended Universe better get Marvel Studios’ Kevin Feige on the line ASAP, because not even David Ayer can save their interconnected films from being anything more than dour dreck. It’s no coincidence that all of this happened after Christopher Nolan left the DC sandbox. Even as dark as his Dark Knight movies were, they still managed to be, above all, fun. Alas, it pains me to say it — after months of well-executed trailers and hype — Suicide Squad is every bit of a misfire as BvS.

In the aftermath of Superman’s death, government official Amanda Waller (Viola Davis) has come up with a plan to use supervillains to fight their battles seeing how the superheroes only wind up leaving collateral damage in their wake. She talks Admiral Olsen (Ted Whittal) and Dexter Tolliver (David Harbour) to let her turn loose an “Anti-Avengers” (if you will) squad of goons upon Midway City — including Deadshot (Will Smith), Harley Quinn (Margot Robbie), Boomerang (Jai Courtney), El Diablo (Jay Hernandez), and Killer Croc (Adewale Akinnuoye-Agbaje) — lead by Rick Flag (Joel Kinnaman) and his lover, poor June Moone (Cara Delevinge), who’s body is inhabited by the evil spirit of Enchantress. Little do they know, Enchantress is using June to unleash hell, after bringing her brother Incubus (Alain Chanoine) back to life to destroy all humans.

And that, dear readers, is about all the plot you get. Oh, the much publicized Joker (Jared Leto) is also running around, hoping to help Harley escape so he can have his beloved minx back. But the saddest part about Ayer’s supposed plot, is that everything even remotely good has been completely spoiled in the trailers. Speaking of which, it starts boring as we have to sit through almost every character’s backstory, set to some random golden oldie, while we have to basically sit through all of the film’s trailers. And that’s just the beginning.

The biggest issue with the film is its mistreatment of its two best characters: Harley Quinn and The Joker. First, Harley is obviously portrayed on screen by Robbie for mere sex appeal alone. Don’t tell me there won’t be a million cosplays of her scantily clad character this Halloween — for better and worse. I may not follow the comics, but I would hope that there’s more depth to the character than simply walking around half naked with a baseball bat while spouting groan-inducing one liners. If that’s all she is, why does anyone like her? Let alone women. Hopefully the next movie gives her the depth she deserves.

As for The Joker, if only he were in more of the movie. We’ve heard horror stories about Leto’s behind the scenes shenanigans as he dove into the ultimate case of method acting, but he’s barely even in the movie. It’s such a shame too. Spoiler alert: I hope the next Batman outing gives us Harley Quinn and Joker as villains to Ben Affleck’s Batman. Now there’s a trio that would be a total blast to watch on screen.

As for Suicide Squad as a whole, Ayer’s screenplay is a disaster. Possibly due to John Gilroy and Michael Tronick’s atrocious editing where you can tell there are clearly missing pieces to the puzzle. I doubt any of it could possibly make the film as different as I’ve heard the R-rated Ultimate Cut of BvS is in its complete form. One of the other main reasons the film doesn’t work is that you never once, for even a second, care for any of the characters or their possible denouements. If we do, it’s only Harley Quinn, Joker, and Deadshot. And the only reason is because we like the actors so much. The rest of the cast literally just stands around, waiting for the time the screenplay finally decides it needs one of them to do something. They just follow the rest of the squad around, making forgettable zingers that do nothing to further the plot.

I know I could easily continue ranting, but the bottom line is that Suicide Squad’s whole never adds up to the sum of its parts. Harley Quinn fans may be eager to see their favorite antihero up on the big screen, but even she deserves better than this — and so do the rest of us.