Gets way more mileage out of the chemistry of the leads than the screenplay. Made for fans of action comedy/buddy-cop comedies.

Rated R for violence and language throughout, some sexual references and brief graphic nudity. 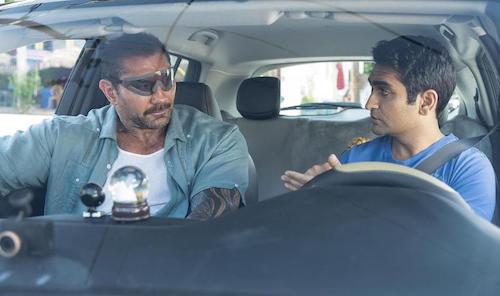 It’s always interesting when studios won’t screen a film for press. While Stuber has been screened multiple times, the alligator creature feature Crawl is getting a cold open. It speaks for itself to say that one of them is being far better received than the other. While both feature the types of mindless thrills we’ve come to expect from summer releases, Crawl has a handful of reviews (14), and stands at 100% on Rotten Tomatoes. Meanwhile Stuber is being saddled with a middling 48%.

Stuber may be better than its online score, but it’s never as hilarious as it should be. At least stars Kumail Nanjiani and Dave Bautista — with the help of ever-reliable indie favorite director Michael Dowse (What If, Goon, It’s All Gone Pete Tong, Fubar) — get way more mileage out of Tripper Clancy’s screenwriting debut than you’d think. It may not be big, but it’s definitely dumb, and thankfully, fun.

Vic Manning (Bautista) is hot on the heels of drug peddling Oka Tedjo (The Raid’s Iko Uwais) with his partner, Sara Morris (Karen Gillan), in tow. After a hotel brawl winds up with Sara getting shot, six months later Vic is still trying to catch Oka if it’s the last thing he does. And just wouldn’t you know it, Vic winds up catching a hot lead that could lead him straight to Oka.

Unfortunately, it’s all going down the same day he gets Lasik and can’t see. Now, Vic calls upon poor Uber drive Stu (Nanjiani) to get him where he needs to be by shouting neighborhoods at him, rather than actual addresses. Together, the two must pair up to bring down the nefarious heroine dealer to keep the street’s kids, and Vic’s daughter safe. All the while Stu — nicknamed “Stuber” by his bullying boss Richie (Jimmy Tatro) — learning his own life lessons about love, and self esteem, along the way.

If there’s one thing that really helps Stuber, it’s a scant runtime. Never wearing out its welcome, the film roars along at a near breakneck speed, earning plenty of laughs — while squeezing in a tiny bit of heart — among some hit-and-miss action sequences. Surprisingly, the offbeat fisticuffs is where the action works best. There’s a one-on-one between Vic and Stu at Stu’s sporting goods workplace that is hysterical, and another shootout set in an animal clinic. Even a car chase between Oka and Stu’s electric Nissan Leaf features the film’s biggest laugh involving Jaws and a mini propane tank.

Unfortunately, it’s when the action needs to count that it completely falls flat. Full of disorienting choreography, Michael Bay-styled quick cut editing, and some horrendous shaky cam, you never know what’s actually happening any time Vic and Oka go head to head. And when you’ve got a down and dirty fight between Drax and Rama, Dowse should be pulling out the stops. But the best filmed fight sequence is the one at Stu’s work, causing the stakes to never feel real.

For interested parties, you’ll come for the laughs, and that’s exactly where the film succeeds the most. Nanjiani is as dryly facetious as ever and Bautista gets some fantastic off the cuff reactions to the shenanigans he gets the two of them into. So while the action may not live up to the best, at least the laughs fly fast and furious. Stuber never tries to raise the bar, but at least keeps sailing along to its own beat. Just know going in that Stuber is comedy first and it’ll make for a fun way to get out of the heat and turn your brain off without feeling bad about it.