Not even Charlie Day has the energy to keep this one joke comedy afloat. Made for only those who laugh at the lamest jokes.

Rated R for language throughout, sexual content/nudity and drug material. 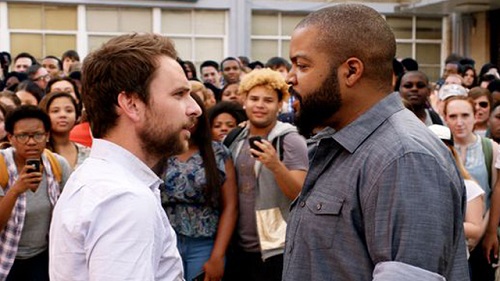 It’s a shame when a movie really could have come together, only to wind up falling so hard. Fist Fight — which should have been titled Teacher Fight — involves so many normally great comedic actors, it’s surprisingly unbearable from start to finish. Charlie Day, Tracy Morgan, Jillian Bell, Kumail Nanjiani — all so great in other things, pretty much anything else — are joined by the likes of Ice Cube, Dean Norris, and Christina Hendricks, to deliver one of the year’s worst films so far.

Andy Campbell (Day) is not looking forward to the last day of school. As a teacher surrounded by shenanigans, it doesn’t help that it’s also senior prank day. Already bullied by the students and fellow staffers — including Coach Crawford (Morgan), Holly (Bell), Principal Tyler (Norris), Ms. Monet (Hendricks), and school security Mehar (Nanjiani) — his day goes from bad to worse when he manages to piss off the most ill-tempered teacher in the whole school, Strickland (Ice Cube), and winds up getting him fired after he attacks a student with an axe. Andy is also dealing with his pregnant wife, Maggie (JoAnna Garcia Swisher), and demanding daughter Ally (Alexa Nisenson).

Fist Fight isn’t just a bad comedy, it’s a horrible movie through and through. One could have hoped director Richie Keen had honed in on his experience with Day having directed 11 episodes of It’s Always Sunny in Philadelphia. But screenwriters Van Robichaux and Evan Susser only managed to come up with one good joke. And even that one was probably a Bell ad-lib. Spoiler alert: “Whoever dies first haunts the school!” That’s the funniest thing in the film and you’ll be sorry you wasted your time and money.

Not even at a short 91 minutes can Keen keep the pace, nor bother to build momentum. There’s been plenty of comedies that get better as they chug along to the finale — which at least they deliver on. But who knew we needed a remake of the little seen Three O’Clock High or wanted one. Nothing works here and it makes sense for Warner Bros. to dump it right in the middle of February. At one point, Day is dragged down a flight of stairs by a horse on meth, and that would be better than ever having to sit through Fist Fight ever again.