Guardians of the Galaxy Vol. 2

Marvel Studios continues to excel when they aren't completely focused on the Avengers. Made for anyone who loves the Marvel one-offs.

Rated PG-13 for sequences of sci-fi action and violence, language, and brief suggestive. 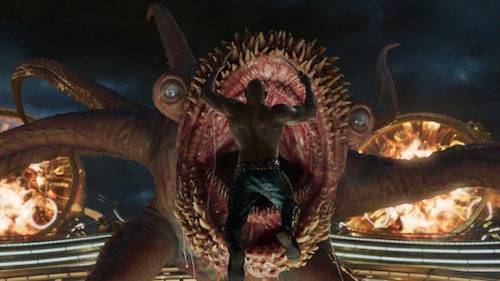 Ant-Man and Doctor Strange raised eyebrows when they were announced. But it was Guardians of the Galaxy that had its work cut out for it the most. Spotlighting a talking tree and a lovably maniacal raccoon, co-writer/director James Gunn had more to prove than anyone. We wound up with one of Marvel’s best entries to their Cinematic Universe — the MCU in geekspeak. A ragtag group of losers — Peter Quill’s (Chris Pratt) words, not mine — wound up saving the universe and proving that Marvel could mine gold out of the most offbeat titles imaginable.

Now, here comes Vol. 2 with an even bigger scope, bigger laughs, and bigger heart. Anyone worried about Gunn dishing up a case of sequelitis can rest their fears. Vol. 2 is one Marvel’s best films.

Kicking off in Missouri, Earth, 1980, we are whisked back in time to meet Meredith Quill (Laura Haddock) and Ego (a spectacularly CGI-ed Kurt Russell). The two are madly in love and Ego takes her into the forest to show her something. Cut to 34 years later and we’re thrust into the Guardians’ latest shenanigan to protect a power source for the Sovereign, lead by Ayesha (Elizabeth Debicki). Soon enough, they’re on the run from the Sovereign and are rescued by what Rocket (voiced by Bradley Cooper) refers to as a one-inch man.

Peter and Rocket manage to crash land on Berhert where they’re followed by their mystery savior who just so happens to be Ego, Peter’s father. Now, Ego has taken Peter — along with Rocket, Gamora (Zoe Saldana), Drax (Dave Bautista), Baby Groot (voiced by Vin Diesel), and Nebula (Karen Gillan) — to his planet, where Peter must come to terms with his heritage as part Celestial, while Ego’s resident Empath, Mantis (Pom Klementieff), harbors a secret. Oh, and Yondu (Michael Rooker) is also on the hunt for the Guardians and dealing with his own discretions and outcasting from the Ravagers.

Drax and Baby Groot completely steal the show this time around. Yondu and Ego also bring plenty of life to the galaxy. Don’t get me wrong, the entire cast is great, but Bautista, and Sean Gunn (brother of James and On-Set Rocket), are true showstoppers. The special effects are as amazing as we’ve come to expect — and even bigger with alternating aspect ratios returning for the IMAX version — but Gunn has clearly been entrusted to deliver the film he wanted to make. Loopy, goofy, full of heart, and gut-bustingly hysterical — with just a dash of gallows humor for good measure, he is, after all, cut from the Troma cloth — no one will leave dissatisfied.

Yes, there is the expected now-annoying Stan Lee cameo, and there are five end-credit scenes — the very last not worth the wait — but Vol. 2 is overstuffed in the best possible ways. The soundtrack is every bit as awesome as Vol. 1, even if not necessarily at first listen. The villain this outing — no spoilers here — is way better than Lee Pace’s Ronan, and while Thanos never makes an appearance, he’s still talked about quite a bit, foreshadowing some characters’ involvement with upcoming Marvel releases. It’s a great start to the year for Marvel.  Next up we have Spider-man: Homecoming and Thor: Ragnarok to look forward to. For now, the Guardians are here to kick off the summer movie season in spectacular style.