Writer/director Pearce make a lackluster debut and has no idea what kind of film he's trying to make. Made for anyone seeking the shelter of the summer heat where they can catch a quick nap.

Rated R for violence and language throughout, some sexual references, and brief drug use. 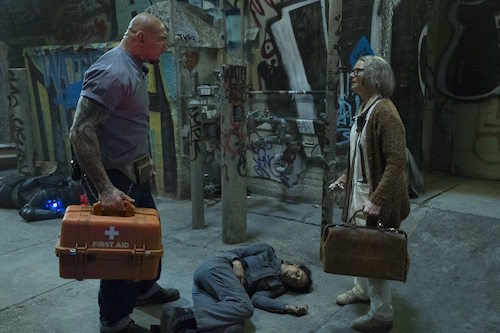 The marketing team for writer/director Drew Pearce’s Hotel Artemis is working overtime trying to make it look like a wild thrillride. Maybe even the underdog action film of the summer. Unfortunately, Pearce has no idea what kind of film he’s wanting to make. Meandering between quirky/dark comedy and melodrama, there’s barely any action. You’re left sitting around for 90 minutes waiting for something, anything, to happen and when it finally does, he picks the most out of left field ending possible and cuts to credits with absolutely no resolution.

The Nurse (Jodie Foster) runs Hotel Artemis — a hideout/ER for criminals — in a rioting 2028 Los Angeles. Following a set of strict rules, The Nurse makes sure everyone is taken care of. But the hotel starts falling down around her after Waikiki (Sterling K. Brown) — everyone is named after the room they’re staying in — and his injured brother Honolulu (Brian Tyree Henry) come in. They’ve stolen $18 million worth of jewels from the Wolf King (Jeff Goldblum), who also happens to be on his way with his own injury. Now, everyone at Hotel Artemis — including Nice (Sofia Boutella), Acapulco (Charlie Day), and The Nurse’s right-hand man Everest (Dave Boutista) — must prepare themselves for the fight of their lives inside, as the riots start making their way outside.

The cast all make what they can with Pearce’s script and direction, but they all look as bored as the audience. Considering the film isn’t even 90 minutes long without credits, this should have been a wham-bam-thank-you-ma’am affair. But all we’re left with is a lot of thinking about what could be happening in the film instead of what Pearce presents us with.

Brown continues to shine no matter how minimal the role, and it’s fun to see Randall Pearson (This Is Us) play brother to Paper Boi (Atlanta), but unfortunately Henry is left recuperating on a gurney for most of the movie. Day also continues to prove he’s a huge theatrical headache and needs just stick to playing Charlie on It’s Always Sunny in Philadelphia. After Fist Fight, Pacific Rim Uprising, and now Hotel Artemis, please don’t quit your dayjob. Boutella and Brown are also fun together, but never get the chance to truly interact aside from a couple of scenes.

Even the action — the two minutes there is of it anyway — is filmed very lackluster and is over before you know it. Hotel Artemis is the one film we didn’t need this summer and offers nothing new to distract from the upcoming tent poles. Save your money, there’s way better coming very soon.