This is the Spider-Man we've been waiting for as our favorite friendly neighborhood web-slinger gets his due. One of the best films of the year. Made for MCU fans, Spider-Man fans, and those who've been looking for that summer magic we've been missing. 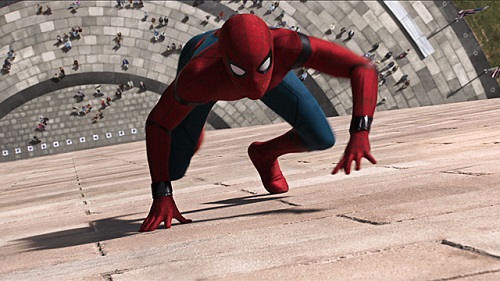 An amazing thing happened to the Marvel Cinematic Universe last year when Sony Pictures finally played ball with Disney and allowed Spider-Man to join the fight. Captain America: Civil War not only brought to life one of Marvel’s best story lines, but it also showed that as fans, we can have our cake and eat it too. And what sweet cake it is. Director Jon Watts — being yet another low budget director handed the keys to the castle — was a left field choice, considering he’s only directed a horror movie (Clown) and a thriller (Cop Car). But it was a brilliant choice in that he knows how to keep a film grounded, thus making Spider-Man: Homecoming the best Spider-Man ever.

In this issue of Spider-Man, Adrian Toomes (Michael Keaton) is working with his crew cleaning up after the New York attack in The Avengers, but not before the U.S. Department of Damage Control — led by Tony Stark (Robert Downey, Jr.) — swoops in, putting Adrian and his men out of work. Eight years have gone by and Peter Parker (Tom Holland) is reliving the glory days of when he took a super secret trip to Germany with the Avengers. Two months later, Peter is stuck on hiatus, waiting for his call to become an Avenger.

Everything seems to be going perfectly well, but little does Peter know that Adrian has been developing high tech weapons from leftover pieces of Chitauri technology. Spider-Man is hot on the case, while a new supervillain, The Vulture, lurks about selling his weapons on the street. Peter tries to warn Tony, but keeps getting brushed off because he’s only a kid. Soon enough, The Vulture turns things personal, and Peter must take the fight into his own hands in order to keep everyone he loves safe.

Watts’s Spider-Man has a lot going for it — most of all, the comedy. This is hands down the funniest Marvel movie to date. But don’t worry, there’s also plenty of web-slinging action to go along with the teen angst. Watts nails the teen high school movie angle. It certainly helps to have cast Holland who just might be one of the best casting choices since Downey put on the Iron Man suit almost 10 years ago. With his cat-like reflexes, snarky wit, and athleticism, Holland was born to play both Peter Parker and Spider-Man. No offense to Tobey Maguire or Andrew Garfield, but this is the Spider-Man we’ve been waiting for.

And so is the film itself. Filled with spectacular — yet surprisingly not too over-the-top — action sequences, characters we adore, jokes aplenty, and even a thrilling score courtesy of Michael Giacchino, Spider-Man: Homecoming proves that the title works on multiple layers. With this being high school set, there is a homecoming dance, but what it really stands for is Spider-Man’s return to where he belongs: right in the middle of the MCU. Make no mistake, the MCU currents run strong and deep throughout Homecoming, and it works all the better for it. While some have complained about how hard Marvel tries to weave the films into each other, it works in spades here. Is this the best Marvel movie to date? It’s hard to say. It’s easy to jump on the bandwagon and make the declaration, but it’s without a doubt one of the best. However, it is absolutely the best Spider-Man film yet, and I can’t wait to see where the Sony/Marvel team take it from here.