A sense of loss hovers over what may as well be called 'Spider-Man's National Lampoon's European Vacation,' but it never gets in the way of the fun. Made for Spidey fans, Marvel fans, and anyone looking to see what the future of the MCU looks like. 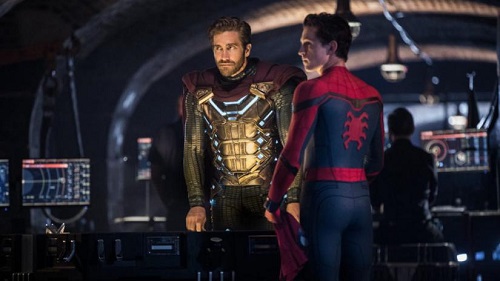 When it comes to the Marvel Cinematic Universe, not all villains are created equal. In the aftermath of Thanos’s “Snapture” — aka “The Snap” — is there any villain who could live up to Infinity War and Endgame? Therein lies the biggest hurdle for Spider-Man: Far From Home. With director Jon Watts returning — along with two of Homecoming’s writers (Chris McKenna and Erik Sommers, also responsible for Ant-Man and the Wasp) — FFH winds up being a hilarious trip through Europe we didn’t know the MCU needed.

In Ixtenco, Mexico, Nick Fury (Samuel L. Jackson) and Maria Hill (Cobie Smulders) are investigating stories about a cyclone with a face when in swoops Quentin Beck (Jake Hyllenhaal) warning them that they don’t want any part of this. Back in New York, Peter Parker (Tom Holland) and his schoolmates — along with the whole other half of the planet who came back during “The Blip” after Iron Man reverses “The Snap” — are dealing with having been held back since they’re all the same age now as when they were turned to dust.

But the school year is over and it’s time to hit the trails for a summer trip to Europe. Peter has plans to woo MJ (Zendaya) atop the Eiffel Tower, but not before a group of monsters called The Elementals show up. Nick Fury has managed to track Peter down, bringing him up to speed, while hijacking their trip. Beck — dubbed Mysterio — has come from the multiverse and may be the only one who can stop the Elementals with only 48 hours until the most powerful monster arrives in Prague. And as Peter comes to terms with the loss of Tony Stark, the Avengers are in need of a new leader.

Taking inspiration from the classic National Lampoon Vacation series, the teens of Midtown High School are off on an adventure, with way more danger than they could have ever imagined. Watts has stepped up his game delivering even bigger action than Homecoming while keeping the same sensibilities. Spider-Man is always caught between doing what’s right as a superhero and making sure he keeps his friends safe. Even if he’s not above accidentally almost blowing up Brad.

Holland commands the role while being surrounded by a hilarious support group of actors. He still has major chemistry with Zendaya and it’s nice to see some other members of the troupe getting a piece of the romance pie. Watching Betty (Angourie Rice) and Ned (Jacob Batalon) fall in love on a plane ride is super cute and Happy (Jon Favreau) trying to keep Spidey’s “Peter Tingle” off his and Aunt May’s (Marisa Tomei) trail could make for an entire movie all its own.

But alas, we came here for our favorite neighborhood Spider-Man and while some may feel the villain is a little lackluster, it fits right into both the MCU needs and Spider-Man’s own comic history. It’s a fun twist getting played out and it’s very reminiscent of what Shane Black did in Iron Man 3. It’s nice to see Kevin Feige let some of the stories get a little wackier than others. I mean, a Spider-Man movie should honestly always be a comedy first. It’s also surprising to see Far From Home feature the most jaw-dropping MCU action scene yet.

Thankfully, Far From Home manages to be all of the above: fun, exciting, action-packed, hilarious, and even romantic. It’s pretty much everything we could want from a live action Spider-Man movie, even if it only manages to set up the next phase of MCU films at the very last second. Yes, stick around through the end credits for two that will blow you away. In the meantime, sit back and relax as Spider-Man: Far From Home swings in to save not just his classmates, but the summer as well.