Spider-Man: Into the Spider-Verse

Spidey gets the film he's been deserving of all along with the year's best film! Made for Spidey fans, Marvel fans, action fans, comedy fans, yeah, basically everyone. 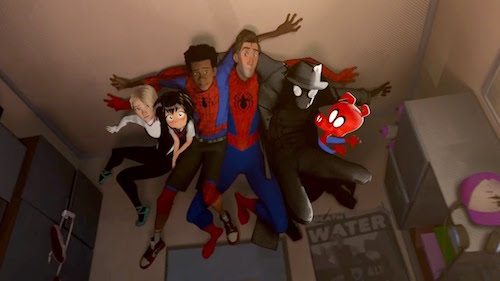 There are three credited directors for Spider-Man: Into the Spider-Verse, but a hunch tells me there may be five. Co-writer Phil Lord and producer Christopher Miller — of Lego Movie/Jump Street fame — probably had more input into the final product than anticipated. Don’t forget, the duo were dismissed from the Solo film clear back in June 2017. With extra time on their hands, why not get more involved?

Not to discredit the brilliant work of Bob Persichetti, Peter Ramsey, and Rodney Rothman (another Jump Street cohort and co-writer here), but it certainly didn’t hurt if they did. Not only is Into the Spider-Verse the first feature length animated Spider-Man film, it’s also the best animated film of the year, 2018’s best film, and the best Spider-Man movie ever.

Miles Morales (voiced by Shameik Moore) is just your average teen. That is if the average teen deals with being bitten by a genetically altered spider and getting caught up in a game of saving the multiverse. Kingpin/Wilson Fisk (voiced by Liev Schreiber) uses a Super Collider causing multiple Spider-People — Peter B. Parker/Spider-Man (voiced by Jake Johnson), Gwen Stacy/Spider-Woman (voiced by Hailee Steinfeld), Peter Porker/Spider-Ham (voiced by John Mulaney), and Peter Parker/Spider-Man Noir (voiced by Nicolas Cage) — to be transplanted in Morales’s version of the Spider-Verse.

The trouble with reviewing a film as good as Spider-Man: Into the Spider-Verse is trying not to sound like a broken record. Everything works better than it has in any of the previous Spider-Man films. As fantastic as Homecoming was, this is even better. Kingpin makes a terrific villain with grounded reasons for what he’s trying to accomplish. He’s surrounded by plenty of henchmen who also have interesting — and in one case heartbreaking — motives.

The animation is a sight to behold. This is one gorgeous piece of art from start to finish. Walking in, there was a lot of hype and it completely blows it away. It’s a jawdropper that needs to be seen to be believed. Along with high swinging action, the screenplay is a boggling collection of jokes and references to all things Spider-Man, Marvel, and pop culture. Keep your eyes peeled for some outrageously hilarious sight gags.

If there’s one surprise, it’s how much heart the film has. Can Spider-Man make you cry? This one might. And not just due to the Stan Lee cameo. Into the Spider-Verse is a game changer of the highest order and cannot be missed. Also, make sure to stay through the end credits in true Marvel fashion.